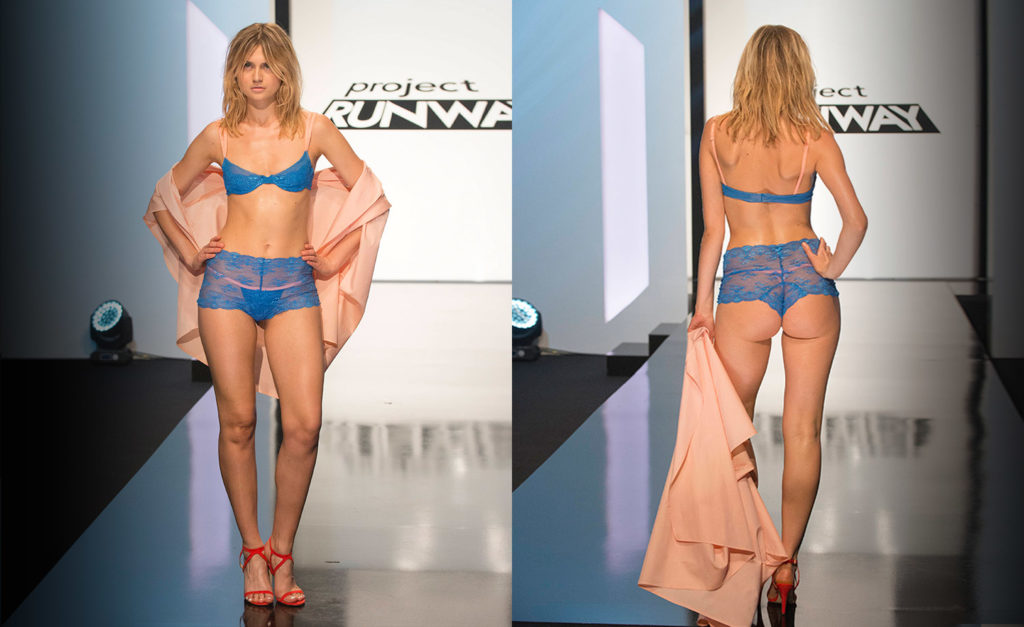 I’ve had a hard time getting a handle on the ‘Project Runway’ oddsmaking process but maybe I’m starting to figure it out. In Episode 4 we saw the elimination of Deyonté Weather who was co-second choice to get her walking papers at +500. Aaron Myers was the top choice to be eliminated (+250) and the top choice to be ‘Bottom Two But Safe’ (+400) and he slid by narrowly and lives to fight…er…design…another day. It has been noted in the previously linked article that Samantha Rei has ‘had about 10 seconds of screen time all season’ and that sure doesn’t bode well for her fortunes going forward.

I guess that Samantha Rei *could* win with no screen time but it’s highly unlikely. It’s not that she’s done a lousy job with just one ‘Low’ (bottom three) score in four weeks but then again she hasn’t had any “High” (top three) scores either. Since she’s soundly in the middle of the pack thus far and has little screen time it’s doubtful that she fits the very important criteria that we discussed last week–just how significant personality is in not only ‘Project Runway’ but all reality shows. Design skills alone aren’t enough to get it done as the elimination of Deyonté Weather demonstrated. He was the Week 1 winner but copped a ‘low’ score in Week 3 and is now on the outside looking in. Rei has three middle of the pack finishes and one bottom three so she could be the next one out.

Also of interest in Episode 4–the much maligned Shawn Buitendorp finished second this week after being bottom three in Episode 1 and bottom two in Episode 3. Last week I mentioned that Lifetime clearly wants to advance the ‘Twin Angle’ and the fact that Shawn and to a lesser extent her sister Claire are becoming objects of derision for the audience actually enhances the probability that they’ll stick around for awhile. Consider this quote from the TVLine.com episode recap:

And how is it that the twins manage to become more obnoxious as the weeks go by? “Everyone’s kind of annoyed,” Margarita said while Claire and Shawn squawked at each other from across the workroom, adding that “it’s not fair” how much they help each other. As Deyonté noted, “I wish I had an extra set of hands.”

YOU GOTTA HAVE A ‘HEEL’

It’s pro wrestling booking 101. You can’t have wrestlers that the fans love and want to buy tickets (or PPVs) to see unless you have wrestlers that they hate. Ricky Steamboat needed Ric Flair. Carlos Colon needed Abdullah the Butcher. The Rock n Roll Express needed the Midnight Express. So on and so forth. The more that the Buitendorp Twins act obnoxious and are perceived to flout the rules by working together, the more anxious that the viewers will be to see their eventual denouement. The fact that Shawn was top two in Episode 4 only helps to advance this ‘angle’.

Another interesting bit of news that has likely been overlooked in the wall to wall hype over Hurricane Irma–the ‘Project Runway’ finalists debuted their collections at New York Fashion Week on Friday. The ‘Project Runway’ producers have done a decent job of keeping things on the QT and attendees weren’t informed as to who designed what or, for that matter, which designers made the finals. There was at least one ‘tell’–one of the collections was almost certainly from the ‘modest but stylish’ design ethos of Utah based Muslim designer Ayana Ife. I’ve been bullish on her chances all season and even had her installed as my opening favorite. Since she clearly makes the finals I’ve bumped her up to the top three of the Season 16 ‘odds to win’. The other favorites are Brandon Kee (one top 3 finish, one top two finish and 1 win), Kenya Freeman (two top three finishes, one bottom three) and Batani-Khalfani (one bottom two finish, two top two). Ayana Ife and Margarita Alverez have a win and a top three respectively but no ‘bottom three’ finishes. The Episode 4 winner Michael Brambila is also in this situation with three straight ‘middle of the pack’ finishes before his victory.

Here’s the updated numbers for Week 5 of ‘Project Runway’ along with some new prop bets. The plot synopsis from LIFETIME describes Episode 5 as follows: “Drawing inspiration from the hit film Descendants 2, the designers visit Lyndhurst Castle and are tasked with creating a look that represents “Good” or “Evil.” Most of the results are angelic, but as always, the devil is in the details.”

TO BE ELIMINATED IN EPISODE 5 ‘PROJECT RUNWAY’ SEASON 16

WILL TIM GUNN USE HIS SAVE IN EPISODE 5?

WILL TIM GUNN SAY ‘GATHER ROUND’ IN EPISODE 5?

WILL TIM GUNN SAY THE WORD ‘FABULOUS’ IN EPISODE 5?

WILL TIM GUNN SAY THAT HE’LL ‘MISS’ THE ELIMINATED DESIGNER?

WILL TIM GUNN USE THE EXPRESSION ‘LOT OF LOOK’ IN EPISODE 5?

WILL TIM GUNN SAY THAT HE IS ‘WORRIED’ OR ‘CONCERNED’ ABOUT A DESIGN IN EPISODE 5?

WHO WILL BE ELIMINATED FIRST?

WILL EITHER BUITENDORP TWIN MAKE REFERENCE TO KATY PERRY?

WILL EITHER BUITENDORP TWIN USE THE WORD ‘INDEED’ IN EPISODE 5?

WILL ANY JUDGE SAY THAT A DESIGN ‘LOOKS EXPENSIVE’ IN EPISODE 5?

WILL ANY JUDGE SAY ‘I WOULD WEAR THAT’ IN EPISODE 5?

WILL ANY JUDGE SAY ANYTHING QUESTIONING ‘WHO SOMEONE IS AS A DESIGNER’ IN EPISODE 5?

WILL ANY CONTESTANT SAY ‘THIS IS A COMPETITION’ IN EPISODE 5?

WILL ANY CONTESTANT USE THE EXPRESSION ‘WHO I AM AS A DESIGNER’ IN EPISODE 5?

WILL ANYONE ON THE SHOW USE THE EXPRESSION ‘MAKE IT WORK’ IN EPISODE 5?

WILL ANYONE ON THE SHOW USE THE EXPRESSION ‘PROJECT SEAMSTRESS’ IN EPISODE 5?

WILL ANYONE ON THE SHOW SAY THE WORD ‘MATRONLY’ IN EPISODE 5?

WILL ANYONE ON THE SHOW USE THE TERM ‘MALL CLOTHES’ OR OTHERWISE SUGGEST THAT AN OUTFIT LOOKS LIKE IT CAME FROM THE MALL IN EPISODE 5?

WILL ANY DESIGNER SUFFER AN INJURY IN EPISODE 5?

WILL ANY DESIGNER CRY ON CAMERA IN EPISODE 5?

KEY DEMO RATING FOR EPISODE 5 AS REPORTED BY ‘TV BY THE NUMBERS‘?

TOTAL VIEWERSHIP FOR EPISODE 5 AS REPORTED BY ‘TV BY THE NUMBERS‘?