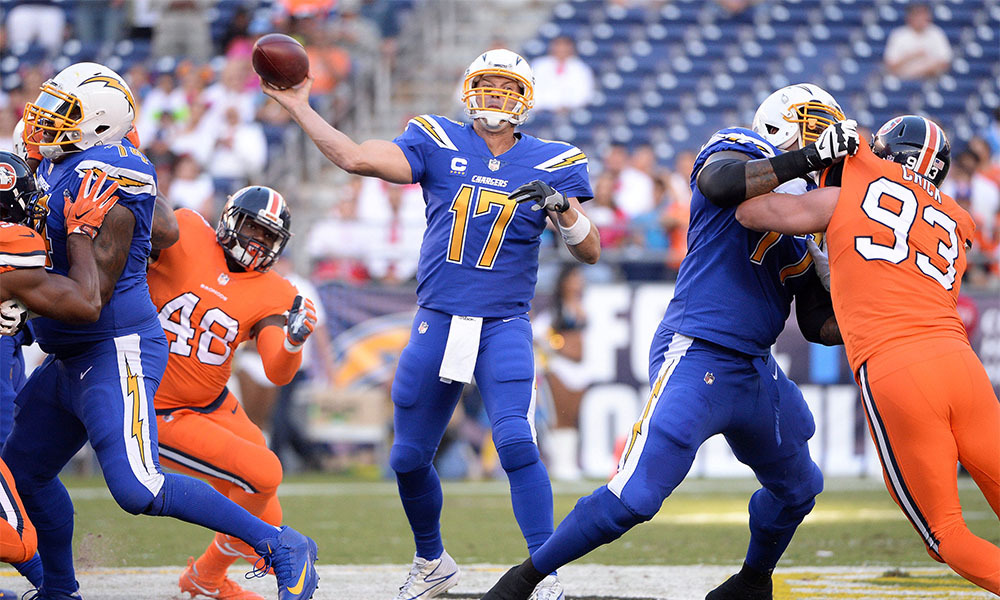 The Chargers may have moved a little more than 2 hours north, but they are the same team who missed out on the playoffs last season. While this is, technically, true, the Chargers team we see tonight will have a different feel about it than the team that only won 5 games last season. With a number of players returning from injury, the Chargers are looking, at least on paper, like a team that could legitimately make a run at the post-season. Of course, it being only week 1 that much is tough to say with any amount of certainty.

As for the Broncos, their own issues last year kept them from making the post-season. To name just one, the Broncos had issues finding consistency at the quarterback position. Trevor Siemian, who now has 3 years of NFL experience, will be called upon in a big way through the 2017/18 campaign. The Broncos are more of a defensive-minded team than anything else, and I fully expect that to be on display in the season opener.

All in all, this is shaping up to be a great divisional matchup to get us into the swing of the NFL season. The AFC West is a stacked division with loads of talent, but it is an open division as well. What we mean by this is that it is anyone’s to win. After the Chiefs got off to a surprisingly upbeat start by beating the defending Super Bowl Champions, New England, and the Raiders defeated Tennessee, it is clear to see that this is one of the most talented divisions in the NFL.

When the -3 (-105) Broncos (-143) take the field on Monday night, they will do so as slight favorites. This is none too surprising seeing as very few teams head to Denver and emerge victorious. Between the raucous home crowd and the thin air due to being more than a mile above sea-level, the Broncos have a very clear, inherent advantage at home. On the field, however, the focus will be on the Bronco offense. Everyone knows that the likes of Aqib Talib and Chris Harris Jr. will be well-prepared to take down the Chargers’ pass game, and their run defense is solid as well, but the big question mark will be when they have the ball.

Though Trevor Siemian will be the center of attention, I am less worried about his performance and much more concerned about the protection he has. Garret Bolles, a rookie, will be making the start at tackle, and there are concerns about his ability to withstand a more than competent Charger pass rush/run defense. With literally no way of knowing how Bolles is going to perform, this is a question mark that will linger until kickoff.

As for the +3 (-115) Chargers (+123), things have not looked as promising as they do now for some time. With Keenan Allen back, the Chargers’ arsenal of offensive weapons has expanded dramatically. Allen suffered an injury that kept him out for the whole of last season, and that allowed relative unknown Tyrell Williams to emerge as a star; as much has there can be a star on a 5-11 team. Melvin Gordon also established himself as a legitimate ground threat last year, so the Broncos’ defense will be attacked from everywhere. Despite this, there are some of the Broncos’ faithful that feel as though Gordon will be shut down tonight. Finally, there is Antonio Gates, someone who is regarded as one of the best tight ends to ever play the game. The Broncos have a well-equipped defense, but the Chargers will surely test it.

The type of game I am expecting will be a mix of explosive and conservative offenses. With all their weapons, I fully anticipate that the Chargers will come out of the gates firing and try to catch the Broncos’ strong defense early. Siemian and the Broncos offense, however, will probably come out playing a more conservative game style. Siemian is far from being an elite quarterback in the NFL, so I feel as though the Broncos will test the waters before really opening their playbook up.

As for who is going to win this game, I think the best moneyline bet to make is on the Chargers (+123). If you look at matchups across the field, I think the Chargers have the upper hand. They have the better quarterback and more offensive weapons. Their defense is nothing to write home about, but the Broncos’ offense is not exactly what I would call potent.

BetOnline lists the over/under at 42.5 points (-108/-112). Though I am taking a chance with this one, I think the better bet is one the over (-108) because I think both of these teams will commit to the aerial attack. With the possibility of big plays, I think this might end up being a higher-scoring game.