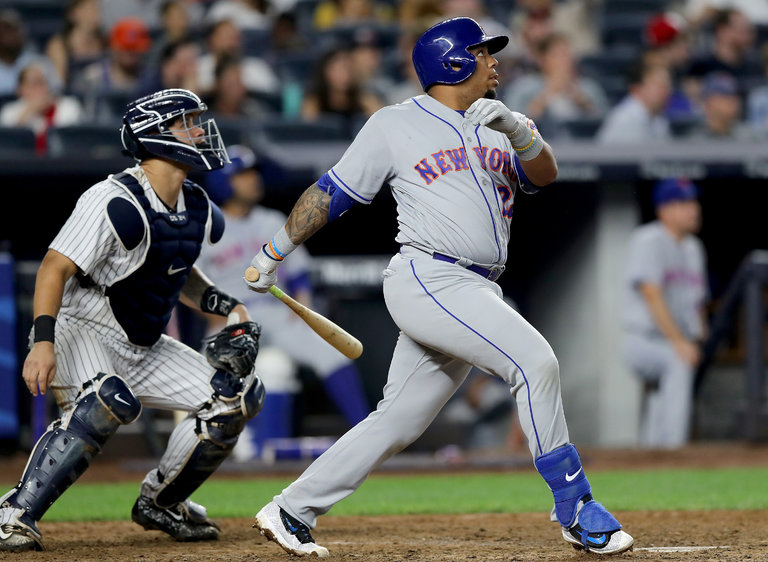 The Mets and the Yankees are taking part in the 21st Subway Series this week, and like most series previous to this one, it has been quite the ride so far. Though the Yankees have won the first 2 games of the home and home series (both of which were at Yankee Stadium), both of them were tight matchups that were nail-biters the whole way. The Yankees having won the first 2 games comes as little surprise to most seeing as they are far and away the superior side, but there may be concerns on Wednesday night if the game remains close in the final innings.

The reason for this is due to the fact that closer, Aroldis Chapman, tweaked his hamstring while covering 1st base to close out Tuesday’s 5-4 victory. Chapman told reporters after the game that the injury was nothing to be concerned about, but that is not preventing people from speculating with regard to his possible absence. Even without Chapman, you have to like the way the Yankees look. After a rough series with the Red Sox, the Yankees have thus far bounced back impressively and will look to reassert their dominance atop the AL Wild Card race.

For the Mets, there isn’t much you can say that isn’t already well-known. For one, they have battled through the first two games of this series. Though both ended up being losses, the fact of the matter is that the Mets kept things close. What has plagued them through 2 games of this Subway Series has been the same exact thing that has plagued them since the season began—a lack of run production. Especially against the Yankees, if you do not get runs across the plate you are going to have a tough time earning a victory.

For the Yankees (-145), it will be the left-hander Jaime Garcia (5-8 4.50 ERA) who will be making the start. Of all the New York Yankee starters, Garcia is amongst the worst as far as performance is concerned. Though he has only started 2 games for the Yankees since being acquired from the Twins, his outings have been less than impressive. In these 2 starts, Garcia has gone 0-1 and has given up a combined 8 runs. While the Yankees managed to win his last start despite him giving up 3 earned runs, the move to acquire Garcia thus far has been a less than fruitful one.

Despite all of this, if the Yankees can get runs on the board I think Garcia’s performance will be a non-factor, at worst. The simple fact of the matter is that the Mets cannot hit very well, and so long as this hold true tonight even an average Yankee offensive performance will be more than enough to overcome their crosstown rivals.

For the Mets (+125), it will be Robert Gsellman (5-5 6.16 ERA) who will be making the start. It is tough to judge Mets pitchers solely based off of their wins and losses because in many cases an earned loss may not be as attributable to the starting pitcher as the stat line might lead you to believe. Gsellman has been decent this year, and his performances across his last 6 games can be described in the exact same fashion. Over his last 6 starts, he has accrued a 3-2 record. For Gsellman, his biggest problem is consistency. If he gives up a few runs in the early goings of things, he tends to get rattled and the floodgates subsequently open. In other performances, he will sit batters down early and that trend will persist until he is pulled. With that being said, however, even a great display by Gsellman might not be enough if the Mets’ bats cannot get things going.

Seeing how the Yankees have been able to pull off close victories in this series so far, I think the Yankees moneyline (-145) is the best bet to take in this one. I truly believe that the Pinstripes will take care of this game early by way of a lot of runs. The bats may not exactly be on fire through 2 games, it is important to remember that the Yankees faced better pitchers on Monday and Tuesday than they will be facing on Wednesday.

As far as the over/under is concerned, it is currently listed by Bovada at an even 9 runs (EVEN/-120). Seeing as both of the first 2 games stayed under 9 runs easily, you might be led to believe that that is a good selection for game 3 as well, but I would disagree. I think you have to take the over (EVEN) in this one primarily because I think the Yankees are going to hit Gsellman all over Citi Field.