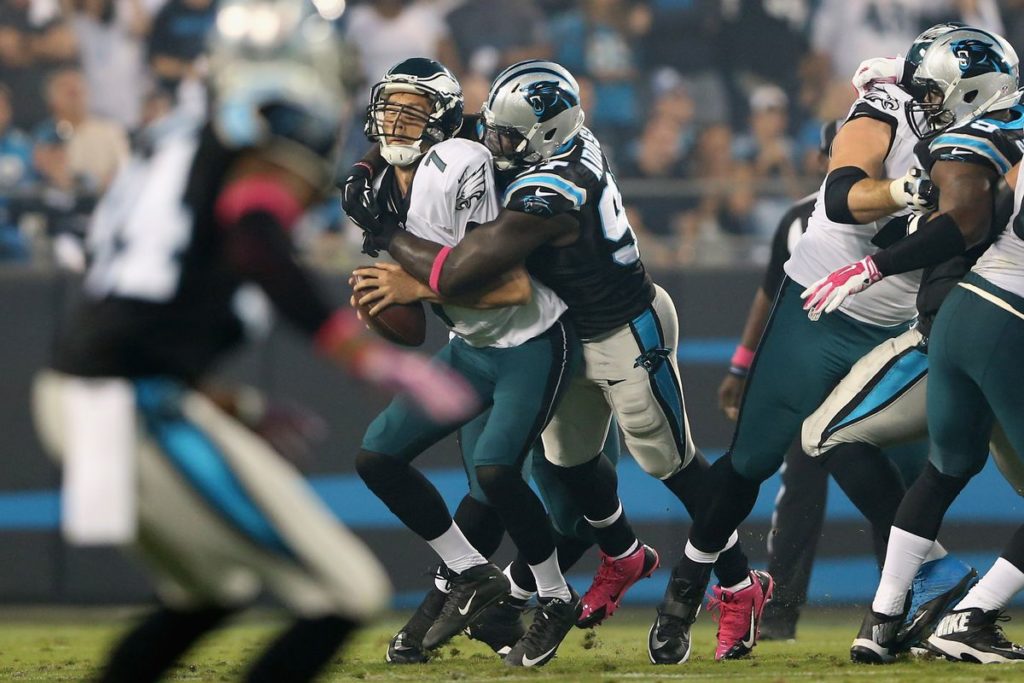 The Philadelphia Eagles and the Carolina Panthers will be riding high heading into their Thursday Night matchup in Charlotte, but only one of the two teams will become the second 5-win team in the NFL this season. Prior to the beginning of the season, this seemed like it would pan out to be an easy victory for the Panthers, a team that is expected to make the post-season. After 2 tough road games and the Eagles looking as strong as they do, that sure thing just got a whole lot less certain.

Philadelphia were never considered to be a team that would finish anywhere near the top of the NFC East, but after 5 games that is exactly what they look like. Last week saw Philadelphia smash the injured Arizona Cardinals by a scoreline of 34-7. Carson Wentz, now in his second year in the NFL, has been dealing the ball. What’s more, the Eagles’ quarterback has a variety of receivers to which he can throw, which he has done week in and week out. There may be some problems with a star offensive lineman for this game, but other than that the Eagles look primed and ready to go.

Carolina will be equally as satisfied with the start of their season as the Eagles are with theirs. The problem, however, lies in the fact that Carolina will be coming into this game on just 3 days’ worth of rest and on the back of 2 grueling away games. To make a long story short, there are very real concerns that all of the traveling the Panthers have been doing lately will become a factor, especially with such a short period of rest between games. On paper, Carolina are undoubtedly the better, more experienced side, but when you consider external factors such is not necessarily the case.

The +3.5 (-115) Eagles (+156) will venture down to North Carolina as underdogs, albeit only slightly so. Carson Wentz has been leading the Eagles through their 4-1 opening season stretch and it is safe to say that he is the heart and soul of the offense. This is the case in Philadelphia, but something most people do not immediately recognize is the fact that the Eagles play a very balanced style of play. Their perfect combination of runs and passes has led them to scoring an average of just over 27 points per game.

The Eagles’ defense has not been quite as prolific as the offense, however it has gotten the job done so far and really shined in recent weeks when it mattered most. Jim Schwartz, defensive coordinator, compared the offensive schemes of the Panthers and Chiefs—a team Philadelphia just recently lost to. Despite the two very different quarterbacking styles, the two teams do run plenty of similar plays. This may work in the favor of Philadelphia, but Cam Newton is never easy to defend against.

As for the -3.5 (-105) Panthers (-176), they are favored by just a slim margin. Cam Newton is also the very vocal leader of this offense and has been playing at the top of his game in recent weeks. Wins in both New England and Detroit did more than add to their record, it gave the entire Carolina team loads of experience. Both of those aforementioned games were won by just 3 points. This is significant because it shows that the Panthers have the grit necessary to win close games. It will be interesting to see if their proven grit can overcome all of this travel and such little rest.

On the defensive side of the ball, I do not think anyone is worried about how Carolina will perform. With Julius Peppers and Charles Johnson manning the defensive end roles, the offensive line of Philadelphia can expect pressure early and often. Adding to the likelihood for success for the Panthers’ defense is the fact that Lane Johnson, perhaps the best offensive lineman for Philadelphia, will likely be missing the game after having been put into concussion protocol during last week’s win versus Arizona. With a young Halapoulivaati Vaitai more than likely making the start, the trenches will be an interesting place to keep an eye on Thursday.

As much as I recognize the Eagles’ ability to thus far greatly surpass expectations, the moneyline you have to go with in this one is the Panthers’ (-176). Despite the lack of rest, I rate Cam Newton higher than Wentz and I think that the Carolina defense is going to have its way with the Eagles’ offensive line. In addition to all of this, I think -176 offers decent value to bettors.

I hate the -3.5 (-105) point spread offered by BetOnline in favor of the Panthers, but I think it is the one you have to take. Both of their previous two victories have been by just 3 points apiece, but the Panthers are now home and playing an opponent that is perhaps the weakest they have seen in the past 3 games.