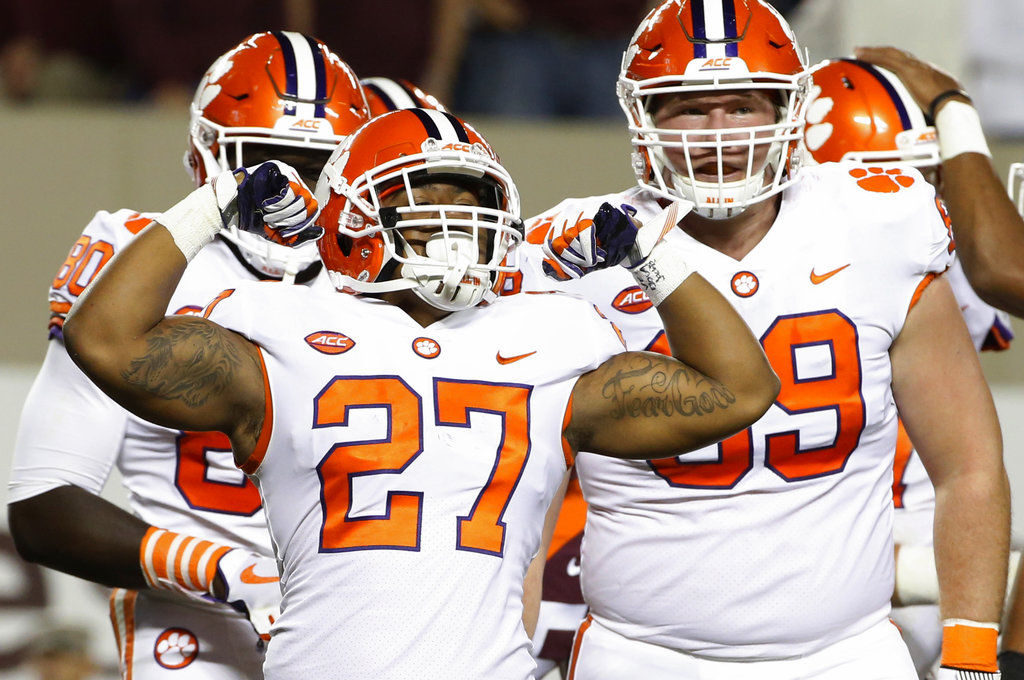 The 2017-18 college football season is halfway over with. And this has given us time to see some of the true contenders thus far.

The Alabama Crimson Tide look as strong as ever, while the defending champion Clemson Tigers are also rolling. Let’s look at these two takeaways and others below.

1. The Pac 12 is Stronger than Anybody Expected

The USC Trojans came into the 2017 season as the favorites to win the Pac 12. But there was little faith in the Pac 12 having any serious championship contenders beyond USC.

However, the conference now looks stronger than ever at the top thanks to No. 5 Washington, No. 8 Washington State, and No. 13 USC.

The Nov. 25 game between the Huskies and Cougars could likely decide the conference title and CFP representative. But USC has an outside chance if they go undefeated the rest of the way. 2. The Big 12 may Miss the CFP for the Second Straight Year

Last week, the Big 12 was the toast of college football with the undefeated Oklahoma Sooners and TCU Horned Frogs. No. 14 Oklahoma State is also a strong team from the conference.

But Oklahoma was upset at home by Iowa State, dropping them to No. 12. And Oklahoma State has already lost to TCU.

This leaves the No. 5 Horned Frogs as possibly the only Big 12 team that can still get into the CFP. It won’t be easy, though, because they face Iowa State, Oklahoma, and No. 24 Texas Tech on the road. 3. Clemson is Great Once Again

The Tigers didn’t come into this season No. 1, despite beating Alabama in the national title game last year. But they’re now edging closer to the Tide in the latest AP polls.

Even with their tough schedule, Clemson is ranked No. 2 and has collected 18 out of 61 first-place votes.

They should return to the CFP title game because they only play one ranked team (No. 20 NC State) the rest of the way. 4. Alabama should Grab the No. 1 Seed Again

The Tide are the only team to play in all three College Football Playoffs since it began in 2014.

An away game against No. 10 Auburn on Nov. 25 remains their toughest test. They could also face No. 4 George in the SEC Championship too. But Alabama looks dominant enough that they should be able to win these games. Michigan coach Jim Harbaugh has received a lot of favorable press for making the Wolverines prominent again. But they just can’t seem to win the big games when it matters most.

Case in point: they lost 14-10 against unranked rival Michigan State (now No. 21). This puts Harbaugh at 1-4 in rivalry games against Michigan State and Ohio State.

Last year’s loss to the Buckeyes cost Michigan a trip to the CFP. Now ranked No. 17, it looks like the loss to the Spartans will cost them a CFP shot this year. 6. It’s Bryce Love vs. Saquon Barkley for the Heisman

Apologies to Oklahoma QB Baker Mayfield, Alabama defensive back Minkah Fitzpatrick, and Wisconsin running back Jonathan Taylor, but this year’s Heisman race is between two guys.

Stanford running back Bryce Love and Penn State running back Saquon Barkley are both putting on shows this season.

Love has the stats with 1,240 rushing yards and 9 touchdowns on just 118 carries. He’s also averaging an incredible 10.5 yards per carry for the 4-2 Cardinals.

Barkley has a respectable 649 rushing yards and 345 receiving yards for the undefeated Nittany Lions. If Penn State remains undefeated, then the bruising 230-pound back could upend Love for the Heisman. 7. The Big Ten is Brutal

Whoever wins the Big Ten will have earned it. Penn State, Michigan, and Ohio State all reside in the Big Ten East. They could very well all knock each other out of CFP consideration.

Wisconsin looks to easily be the best team in the Big Ten West. And the No. 7 Badgers can earn a playoff spot if they win the Big Ten Championship. 8. Iowa State has the Upset of the Year So Far

Few predicted that the 2-2 Cyclones would walk into Norman and beat the nation’s No. 3 team.

But Iowa State did just that in knocking off the Sooners 38-31. This such an upset that it’s conjuring conspiracy theories.

The 3-2 Cyclones still aren’t ranked, even after their big win. But they could jump into the top 25 with a couple more victories.

9. Navy is Having a Hell of a Season

Service academies haven’t been big on the national football scene for decades.

But the Navy Midshipmen are certainly off to a good start so far. They’re ranked No. 25 with a 5-0 record.

Navy has quality wins over Cincinnati and Air Force. And they’ll have a chance for more as they face No. 22 UCF and No. 16 Notre Dame later in the season. The Miami Hurricanes haven’t finished any better than 9-4 in the last decade. But the Canes are off to a great start in Mark Richt’s second season with the team.

They’re 4-0 and currently ranked No. 11 overall. Miami has tough remaining games against No. 15 Virginia Tech and No. 16 Notre Dame.

But it’s conceivable that they could run the regular season table and meet Clemson in the ACC Championship.