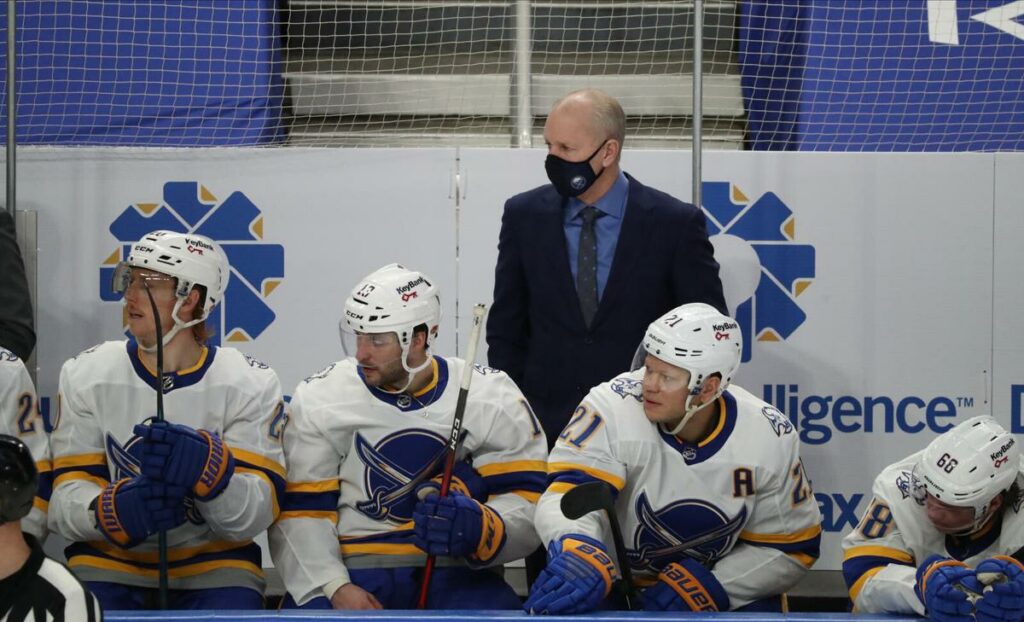 The hapless Buffalo Sabres have plenty of talent but continue to underachieve. Where have we heard *that* before? This is a recurring theme in Buffalo but it looks as if Sabres’ ownership and management are running out of patience with the bumbling but highly paid team. In a conference call on Friday, GM Kevyn Adams put head coach Ralph Krueger squarely on the hotseat and put just about everyone else associated with the team on notice calling the team’s play ‘unacceptable’.

Adams was vague about Krueger’s fate saying simply that ‘everything is under evaluation’ regarding not only the status of the head coach but the team as a whole. Adams says that he has full authority from owners Terry and Kim Pegula to do what needs to be done when it comes to hockey operations. As for Krueger, he would only allow:

“He understands the situation we’re in is unacceptable, and the players do, everybody does.”

“I like Ralph a lot. I’ve learned a lot from Ralph. But we both know that this hasn’t been good enough in terms of translating to success. We’ll assess everything.”

The Sabres have won only two of their last twelve games (2-9-1) and are 6-12-3 overall this year. They are already at risk of extending their playoff drought to 10 years. Adams read the riot act to everyone involved with the hockey operations:

“I’m angry and I hope that all of you are. I would hope that our fans are because that means you care, and that’s a good place to start. But what’s going on is unacceptable.”

On another topic, Adams said that team captain Jack Eichel hasn’t asked to be traded though he was noncommittal on whether he’d consider making a deal:

“Jack is one of the best players in the world, period. Are people going to make a phone call and ask? Of course. And that’s the extent of it. For me, Jack is someone when you see him going and you see the dynamic difference-maker he can be, there’s not many in the league like him.”

Adams called out his players’ desire and tenacity:

“I will never tolerate excuses. For me, that’s a really important message I have to the players. It’s, ‘Hey, we’re in this thing. You show up and you’ve got to get after it.’ That’s it. No excuses.”

“We’re not hungry enough to get to the net and we’re not competing enough. That’s battle and will, right?”

Krueger might still be coach of the Sabres but the Buffalo area media doesn’t think he should be. In an editorial after Adams’ tirade veteran columnist Mike Harrington went even further:

Now the GM needs to do something – anything – to fix a team that is nothing short of disgraceful.

That’s the exact word I used with Ralph Krueger during his media call earlier Friday, and you can’t argue it. Look at this roster with all these high draft picks. How is this team last in the NHL? How does it have fewer wins than Detroit and Ottawa?

Most of all, how is Krueger still employed?

That tone isn’t surprising–in a previous editorial Harrington correctly noted that Krueger’s ‘credibility is shot’. As far the rest of the team (besides Eichel) there isn’t anyone that is ‘untouchable’. Center Sam Reinhart’s name has been mentioned as a possible trade candidate along with Brandon Montour, Casey Mittlestadt and Taylor Hall.