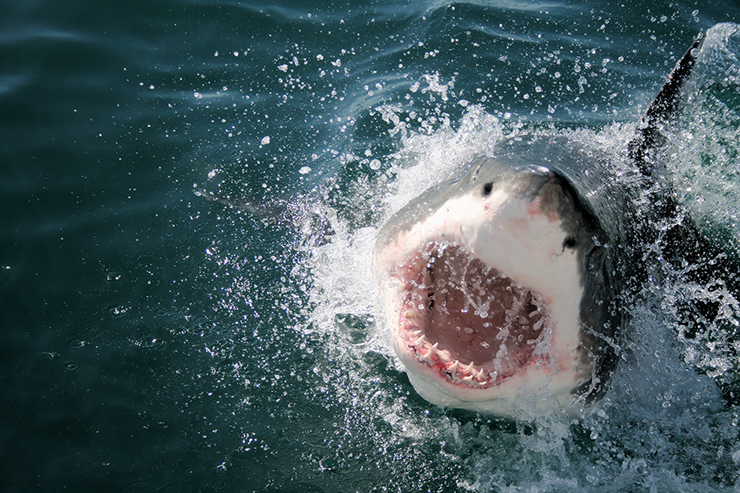 –People have been fascinated by–and terrified of–sharks for centuries.

–Unprovoked shark attacks are rare, fatal attacks even more so.

–2017 has seen an upswing in the number of shark attacks worldwide.

It is simultaneously fascinating and bizarre that humans are still afraid of shark attacks. At one point it made at least a little bit of sense. When humans were forced to endure long journeys by sea to get anywhere worth going they faced danger from not only sharks but countless other natural forces including weather and the ocean itself. Early shark attacks were likely no more prevalent than they were today (in fact, there’s a good case to be made that they were less common) but were often conflated with mythical creatures such as ‘sea serpents’. If someone disappeared at sea human nature wanted an explanation and with none forthcoming these hapless souls turned toward their own mythical creations.

Fast forward to 2017 and the fact that anyone is seriously worried about shark attacks is borderline comical. A random American citizen has a statistically insignificant chance of being involved in a fatal shark attack. Living on or near the coasts makes it somewhat more likely but still statistically insignificant as we’ll discuss in a moment. It would be nice to affirm that humanity has evolved beyond this type of behavior but they haven’t as witnessed by the prevalence of Americans to swallow the propaganda about the virtually non-existent risk off harm by foreign terrorists hook, line and sinker. Compared the 1 in 46.1 million chance of being the victim of a fatal attack by a foreign terrorist being afraid of sharks looks logical by comparison.

BASELESS FEAR IS NOTHING NEW

Overreacting to non-existent danger has been used by government and religion to subjugate humanity for centuries. Not that they’ve had a hard time doing it–humanity has a ‘bug in the system’ with their genetic wiring that makes them fearful over highly unlikely outcomes such as severe weather, air travel or even an asteroid crashing into earth. One of the oldest and most enduring of all irrational fears is the fear of sharks. It’s unclear at what point humans became terrified of an animal that most will never even see. It dates back centuries–as long as humanity has been circumnavigating the globe via ocean travel. At one point, the fear of sharks was symbiotically connected to a fear of sea monsters and other superstitions that people used to try and force order on a pre-scientific world. It’s the same phenomenon that resulted in hurricanes being mythologized–being afraid of monsters and storms makes more sense to the human brain than just accepting the fact that the universe is an exceedingly chaotic and random place.

The fear of the irrational starts to get *really* strange as we move into the 19th, 20th and now the 21st Century. Humanity has a profound understanding of most of the questions that bedeviled the world several centuries ago. People should know that flying is significantly safer than traveling by car yet millions still suffer from ‘fear of flying’. The explanation for everything is just a click away and available to all intellectual levels yet the mainstream media has made a cottage industry of selling the concept that there is more danger–and more unexplained danger–than at any point in history.

Currently, there’s a ridiculous level of media coverage about what has been described as an ‘unprecedented’ increase in the number of shark attacks. It was somewhat dormant until the release of ‘Jaws’–the classic killer shark film that introduced mainstream America to the Great White Shark as it terrorized affluent yuppie tourists on Cape Cod. Ironically, the year that ‘Jaws’ was released (1975) Cape Cod experienced a whopping *zero* reported shark attacks. Not that this was especially surprising since the entire state of Massachusetts has had only seven unprovoked shark attacks. Ever.

MEDIA HYSTERIA OVER A NON-EXISTENT THREAT

If you’re afraid to swim in the ocean because of sharks you need to find another excuse. Since 1900 there have been only 1657 reported unprovoked shark attacks in the United States (if you’re provoking sharks you deserve what you get). For those of you scoring at home, that’s an average of just over 14 per year. Fatal attacks are even less common with only 114 unprovoked fatalities due to shark attacks in the US or an average of just under 1 per year.

There are certain demographics that need to be aware of sharks and their risks. These people are salt water recreation enthusiasts, more specifically surfers. 58% of all reported shark attacks have ‘surfing’ listed as the ocean activity in question. If you’re a surfer you should be mindful of sharks in the same way that backcountry snowboarders understand avalanches and avalanche safety. In these cases, of course, we’re not talking a hysterical and irrational fear–it’s a legitimate concern that participants in these sports need to be aware of.

THE REALITY OF THE SITUATION

There is a greater observance of shark activity in some areas, particularly Southern California. There are a variety of theories that attempt to explain this but none are deserving of media hysteria. It wasn’t that long ago (2015-2016 to be specific) that the media was chortling about a record decline in shark bites. It’s not hard to experience huge percentage fluctuations from year to year when the number of shark attacks annually has never exceeded 100.

WILL THE NUMBER OF REPORTED SHARK ATTACKS WORLDWIDE IN 2017 BREAK THE ALL TIME YEARLY RECORD OF 98 REPORTED IN 2015?

PERCENTAGE OF TOTAL SHARK ATTACKS EXPERIENCED BY SURFERS IN 2017?

Activity in the Global Shark Attack File incident log must specifically indicate ‘surfing’. Any other water borne activity will not be included in total.

US STATE WITH THE HIGHEST NUMBER OF REPORTED SHARK ATTACKS IN 2017?

US COUNTY WITH THE HIGHEST NUMBER OF REPORTED SHARK ATTACKS IN 2017?

AUSTRALIAN STATE/TERRITORY WITH THE HIGHEST NUMBER OF REPORTED UNPROVOKED SHARK ATTACKS IN 2017?

WILL THERE BE A REPORTED SHARK ATTACK ANYWHERE IN THE WORLD ON JULY 4, 2017?

NUMBER OF REPORTED SHARK ATTACKS IN THE UNITED STATES ON JULY 4, 2017?

WHICH YEAR WILL HAVE MORE SHARK ATTACKS REPORTED IN MASSACHUSETTS?