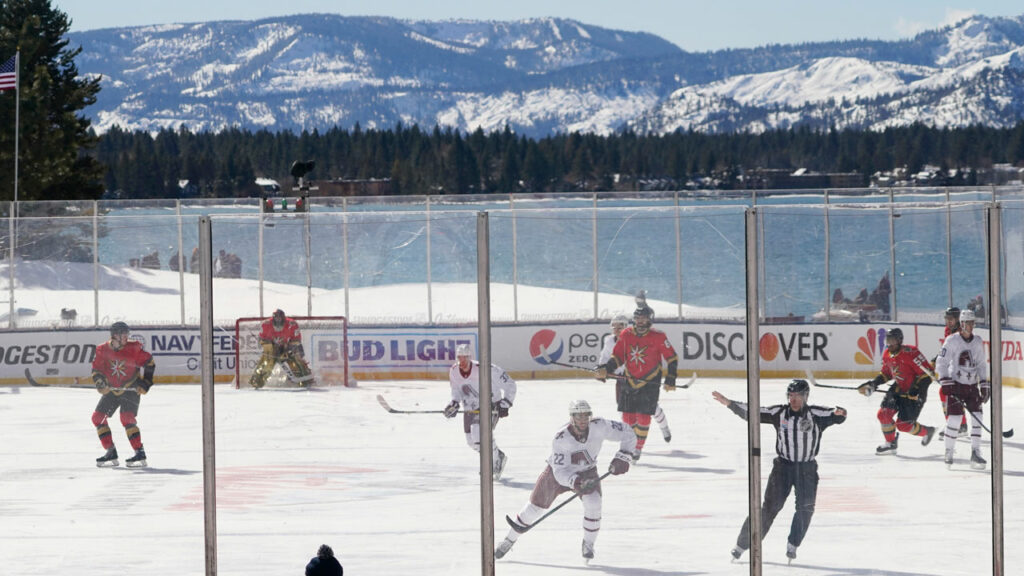 You won’t often see a sporting event delayed or suspended because the weather is too *good* but that’s exactly what happened on Saturday afternoon. The NHL announced that Saturday’s outdoor game at Lake Tahoe between the Vegas Golden Knights and Colorado Avalanche would be postponed after one period due to poor ice conditions. The game will be resumed at 9 PM Pacific/12 Midnight Eastern with Colorado leading 1-0.

The ice problems were caused by the absolutely gorgeous weather in Lake Tahoe this weekend. The combination of a bright sun, no cloud cover and unseasonably high temperatures above freezing have caused melting and other damage to the NHL’s temporary hockey rink .

The Avalanche led 1-0 on a goal by defenseman Samuel Girard, but the bright sun created numerous issues with the ice surface on the rink built on the 18th fairway of Edgewood Tahoe Resort golf course.

The area near the center ice logo was severely damaged, causing players and officials to trip and fall on a handful of occasions during the first period.

The NHL announced that Sunday’s outdoor game at Lake Tahoe between the Philadelphia Flyers and Boston Bruins has been moved to a 7:30 p.m. ET start time, and will now be broadcast on NBCSN instead of NBC.

It was originally scheduled for a 2 p.m. ET start time.

Along with this change, Sunday’s game between the Washington Capitals and New Jersey Devils that was originally scheduled for 7 p.m. ET has been moved to that 2 p.m. ET time slot and will be broadcast on NBC

“We always knew and we’ll know going forward that when you play outside and ice is important, the weather conditions can affect whether or not we can play the game. We’ve been lucky to this point.”

“We’ve done over 30 outdoor games. This has been the most difficult weather circumstance we’ve had, and it’s a beautiful day.”

The game will resume on Saturday night at the start of period two with Colorado holding on to a 1-0 advantage.