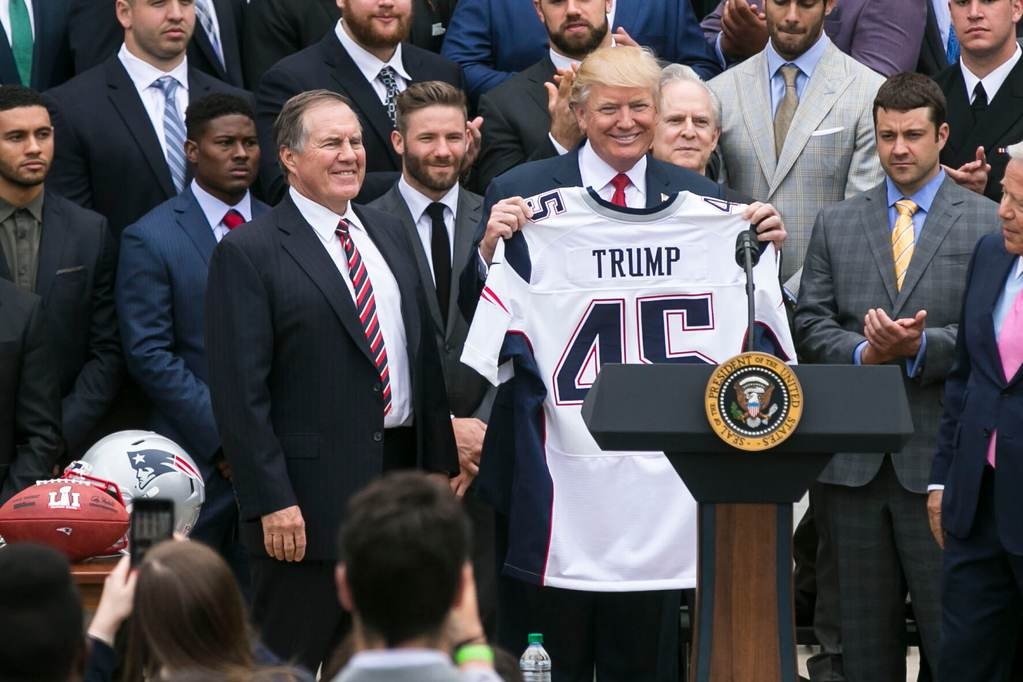 Turns out that Bill Belichick isn’t completely tone deaf. On Monday, the legendary head coach of the New England Patriots refused to accept the Presidential Medal of Freedom from his buddy Donald Trump. He did so in a statement that read out of context would have completely left you scratching your head wondering about his reasoning.

According to Belichick, he’s ‘not a political guy’ but his is by his own admission friends with the now disgraced sitting president:

“I think anybody that’s spent more than five minutes with me knows I’m not a political person. My comments aren’t politically motivate. I have a friendship and a loyalty to Donald.”

The comments in question were in the form of a letter that Trump read at a campaign rally in New Hamprshire back in 2016:

“Congratulations on a tremendous campaign. You have dealt with an unbelievable slanted and negative media and have come out beautifully. You’ve proved to be the ultimate competitor and fighter. Your leadership is amazing. I have always had tremendous respect for you, but the toughness and perseverance you have displayed over the past year is remarkable. Hopefully tomorrow’s election results will give the opportunity to make America great again. Best wishes for great results tomorrow. Bill Belichick.”

In dismissing the notion of any political motives Belichick also pointed out that he was friends with former Massachusetts Senator John Kerry:

“That’s another friend of mine. I can’t imagine two people with more different political views than those two, but to me friendship and loyalty is just about that. It’s not about political or religious views.”

To hear Belichick tell it he spends most of his free time writing notes and letters to random people:

“I write hundreds of letters and notes every month; doesn’t mean I agree with every single thing that every person thinks about politics, religion or other subjects. I have multiple friendships that are important to me. That’s what that was about.”

Doling out the Presidential Medal of Freedom is something every Chief Executive does–it’s usually a ‘feel good’ gesture and gives the POTUS the opportunity to rub shoulders with personal heroes. Trump has focused on sports legends and there’s nothing wrong with that. In a vacuum, there’s also nothing wrong with Belichick being chosen for this honor.

Thankfully, however, it looks as if Belichick’s ‘loyalty’ doesn’t extend to inciting an angry mob into violently trying to attack the US Congress. On Monday, Belichick announced that he won’t ‘move forward’ with accepting the medal. His statement is amazingly mealy mouthed and misses the point entirely:

“Recently I was offered the opportunity to receive the Presidential Medal of Freedom, which I was flattered by out of respect for what the honor represents and admiration for prior recipients. Subsequently, the tragic events of last week occurred and the decision has been made not to move forward with the award.”

“Above all, I am an American citizen with great reverence for our nation’s values, freedom and democracy. I know I also represent my family and the New England Patriots team. One of the most rewarding things in my professional career took place in 2020 when, through the great leadership within our team, conversations about social justice, equality and human rights moved to the forefront and became actions.”

“Continuing those efforts while remaining true to the people, team and country I love outweigh the benefits of any individual award.”

Remember what I said about ‘The Hoodie’ not being tone deaf? Scratch that. ‘Tragic events’? This makes it sound like Belichick is offering condolences to plane crash victims. Trump’s name isn’t mentioned nor are relevant terms like ‘armed insurrection’, ‘treason’, or ‘impeachment’. Nor does this have anything to do with ‘social justice’ though there have been tortured compare and contrast efforts made to 2020’s protests against police brutality toward African-Americans.

There have been polarizing figures in the White House before and there will definitely be more in the future. To some degree, that’s all we’ve had during the past few decades. On the Republican side of the aisle, Nixon, Reagan and George W. Bush were especially polarizing. While the mainstream media loved to fawn over Democrats Obama and Clinton–along with his wife and failed presidential candidate Mrs. Clinton–there were plenty of reasonable people who found them contemptible. For most of his presidency, Trump was just another in a long line of polarizing figures to serve in the highest office in the land. That was before he took a leave from reality with false claims that the election was ‘stolen’ despite a complete lack of evidence to support those claims. And no matter how much their political opponents disliked Reagan, Nixon or Clinton it’s doubtful that they ever had legitimate concern that they would at best condone and at worst incite an armed insurrection against the US government.

South Carolina Senator Lindsay Graham is as reprehensible as any politician in the land. He’s since flip flopped on his initial disgust over the Trump riots but that doesn’t negate the fact that he’s probably had the most salient comment about the entire fiasco: “enough is enough”.