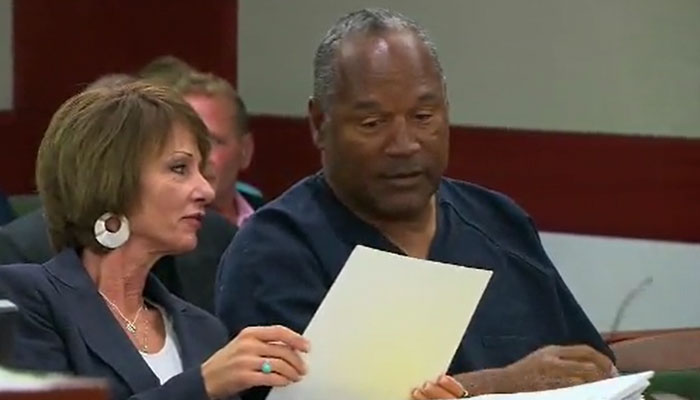 –OJ Simpson’s parole hearing is scheduled for Thursday, July 20 with a decision announced later in the day.

–NFL great OJ Simpson became infamous following the murders of his ex-wife and her male friend.

–He was acquitted of their murders but was sentenced to a long prison term on other unrelated charges.

As improbable as it might sound, there’s a very good chance that former NFL great OJ Simpson will be a free man by the end of 2017. The running back formerly known as ‘The Juice’ is scheduled for a hearing in front of the Nevada Board of Parole Commissioners in Carson City on Thursday, July 20. Simpson will participate via video from the Lovelock Correctional Institution located in the barren wilderness of Northwestern Nevada. If a simple majority of the four commissioners vote in favor of parole, Simpson will be released in early October. If the vote is a 2-2 deadlock the commissioners will get a couple of their peers involved via video from Las Vegas. The second round of voting would involve all six commissioners and once again require a simple majority to set Simpson free. Should the second round of voting result in a 3-3 deadlock the Parole Commissioners will try again in January 2018.

It’s unlikely that the process will become that involved. Most experts on the Nevada parole system that have spoken to the media are of the opinion that Simpson is a strong candidate for parole. The regulatory structure of Nevada’s parole system also works in his favor. His former lawyer Yale Galanter explains:

“It’s based on his behavior in prison and that certainly hasn’t changed. He’s been a model inmate. He’s had no write-ups, no disciplinary issues. By all accounts, he’s totally abided by the rules. Here, if you’re a model prisoner, you behave yourself, you’re not a flight risk, you get paroled.”

For OJ, the key component of that explanation is that the parole decision is based exclusively on his behavior in prison. That takes the mid 90’s ‘unpleasantness’ with his ex-wife Nicole Brown and a waiter named Ron Goldman from the once hip, now defunct Los Angeles restaurant Mezzaluna off the table. For those of you that were living in a cave during the 1990’s, Simpson was charged with the grisly decapitation murders of his ex-wife and Goldman. He was infamously acquitted on the murder charges but lost a a $33.5 million judgment in civil court for the deaths of Brown and Goldman. The murders and the subsequent trial were one of the biggest media train wrecks in history. The perception that OJ is a double murderer that managed to skate has been a dark cloud over his existence ever since but according to Galanter there are four people that won’t judge him on that–and they’re the once deciding the fate of his parole bid:

“The people that are making this decision are part of the legal system. The hype is about the murder charge and the legal system found him not guilty. The law said he didn’t do it.”

Galanter says that the parole hearing itself is basically an opportunity for OJ to give a statement. The commissioners already know his record as a prisoner and the majority of deliberation happens prior to the hearing:

“The parole hearing is really more for Mr. Simpson to give a statement like he did the first time around.”

He minimized the significance of the hearing itself suggesting that it’s a ‘routine administrative matter’:

“It’s a fairly routine administrative matter. It’s more like, ‘Mr. Simpson, you’ve been a model prisoner, you have the points, congratulations, do you have anything to say, thank you very much, granted, Oct. 1.'”

THE (MEDIA) CIRCUS ROLLS INTO TOWN

It all sounds simple enough, but by now you’re aware that nothing involving OJ is ‘simple’. The mainstream media has all but assured that the parole hearing will be another three ring circus. The Nevada Department of Corrections as of Friday had issued over 250 media credentials for the hearing and over a dozen satellite trucks are expected to descend on Carson City and Lovelock. They’re even announcing their decision at the time of the hearing–they usually don’t do that for a couple of weeks. They don’t sound too happy about the situation:

“The media interest in this one case is a disruption to our operation. A decision (on Simpson) is being made at the time of the hearing so that the board’s operation can return to normal as soon as possible after the hearing.”

The media is doing their part to make sure it’s a massive fiasco. A number of networks will broadcast the parole hearing live including CBS, CNN, ABC, NBC and ESPN. It doesn’t sound like OJ is too happy about it either and he’s concerned that the media hype is going to ‘screw with the parole board and put pressure on them to keep him locked up’. He likely deserves parole under the criteria used in the state of Nevada but his concerns are definitely a possibility.

The more interesting component of this story is what OJ does after he gets out of prison (assuming he’s granted parole). His longtime nemeses the Goldman family are still going to do whatever they can to make his life miserable and sound downright psychotic in this quote:

“They (the Goldmans) have vowed to pursue him to the ends of the earth and will continue to do so after he walks out of prison. His nightmare might be coming to an end, but theirs never will.”

The prospect of OJ Simpson walking out of prison a free man within a matter of months presents no shortage of questions. SPORTS BETTING EXPERTS has set betting odds on the parole hearing and on some of the questions concerning what life will be like for OJ when he ‘becomes a citizen again’ at the age of 70:

Will OJ Simpson be released on parole?

The count of the first parole commissioner vote will be?

Will the first parole board vote be a 2-2 deadlock?

Will the second parole board vote be a 3-3 deadlock necessitating a new parole hearing in January 2018?

If a second vote isn’t necessary this bet will be graded ‘No’. Should the parole hearing vote count not be released publicly the previous three bets will be graded ‘no action’

Will OJ Simpson address the parole board at the hearing (live or via videotape)?

Will Donald Trump reference OJ Simpson and/or his parole hearing in a Tweet before 11:59 PM Eastern on July 23, 2017?

Will any of OJ’s children greet him as he leaves prison?

What will OJ Simpson do as he leaves prison?

Will OJ Simpson speak to the media at the time of his release?

Where will OJ Simpson live after his release from prison?

Will the family of Nicole Brown and/or Ron Goldman release a statement upon OJ Simpson’s release?

Will OJ Simpson go back to prison for another crime before 1/31/18?

Will any of the living members of OJ Simpson’s legal ‘dream team’ from his murder trial make a statement upon his release? (Alan Dershowitz, Robert Shapiro, Barry Scheck, F. Lee Bailey)

Will any member(s) of the Kardashian family make a statement upon OJ’s release?

Will “Kato” Kaelin make a statement upon OJ’s release?

Will the Buffalo Bills, San Francisco 49ers, Roger Goodell and/or the NFL make a statement upon OJ’s release?