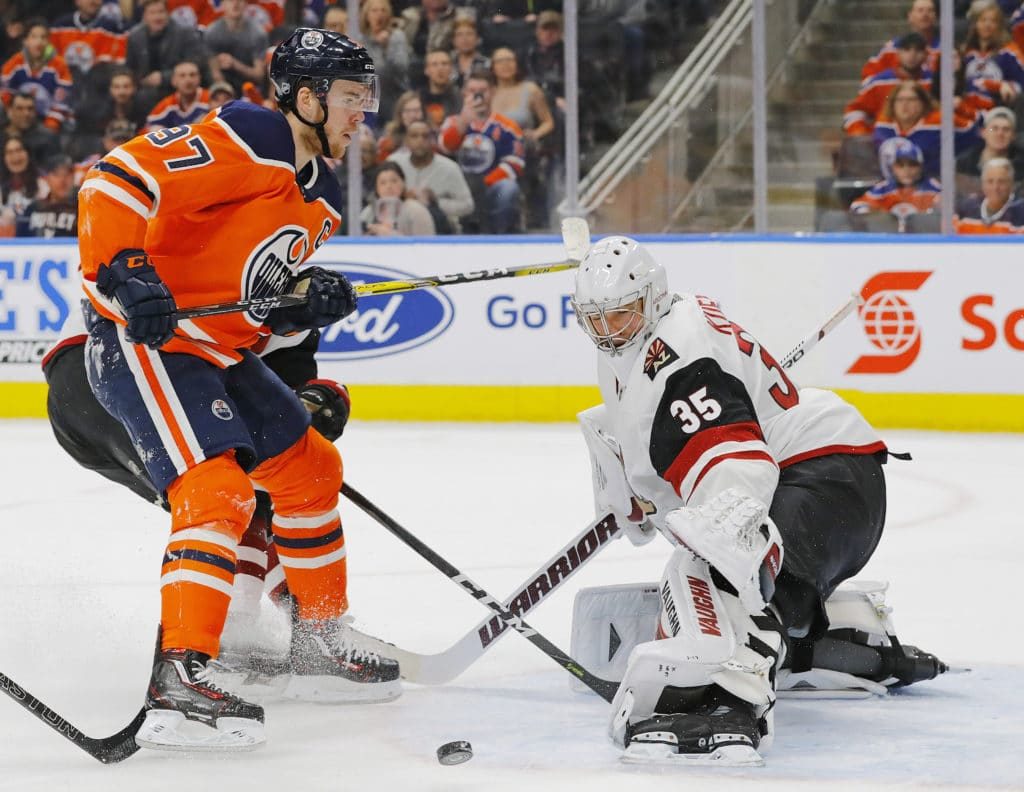 Two teams heading in different directions go at it Saturday afternoon at the Staples Center as the Arizona Coyotes take on the Los Angeles Kings. It wasn’t that long ago that the roles of these teams were reversed but the Kings are a shell of their excellent Stanley Cup winning teams of recent vintage. Now Los Angeles is mired in the Pacific Division basement and have the dubious distinction of having the worst record in the Western Conference, albeit by a single point behind the Minnesota Wild. They might be able to take a little solace in the fact that they just have the third worst record in the NHL–they’re 2 points ahead of Detroit and 1 point ahead of New Jersey.

For the Arizona Coyotes things are completely different this year and their dramatic change has been for the good. In 2012, the Coyotes reached the Conference Finals where they lost 4-1 to the LA Kings. Since then, they’ve finished 10th, 9th, 14th, 10th, 12th, 15th and 9th. Their on ice struggles were bad enough but their ownership instability made this stretch all the worse. Former owner Jerry Moyes declared bankruptcy in 2009 and the team was taken over by the league until 2013. They were able to find ownership to keep them in Arizona but financial instability and constant rumors of relocation continued.

In June 2019, the Coyotes got a new lease on life. Billionaire Alex Meruelo took over majority ownership of the team and is committed to exploring every option to keep the team in Arizona. He’s of Cuban ancestry and is now the NHL’s only Latino majority owner. Every expectation was that the team would improve this season but the degree to which it has happened has been a surprise. The team brought in some veterans, most notably Phil Kessell and Derek Stepan. Almost simultaneously, the young prospects that the Coyotes stockpiled during their lean years have all hit their prime. The team has a very balanced offense but the points leaders are a pair of 23 year olds–Wisconsin native Nick Schmaltz and Massachusetts native Conor Garland.

The biggest transformation has come on the defensive end. In 2016-2017, the Coyotes had the #27 team defense allowing 3.15 goals per game. The following year, they improved to #21. Very quietly and completely ‘under the radar’ they made another huge jump last season finishing in a 5th place tie with the Stanley Cup champion St. Louis Blues. They’ve found a way to get even better this year–they enter play tonight as the top team defense in the NHL allowing 2.26 goals per game. Ironically, it is now the LA Kings who occupy the #27 team defense–a shocking transformation after years as one of the top defensive teams in the league.

In net, 29 year old Darcy Kuemper has raised his game to another level. He’s always been a capable goaltender but found himself in a state of flux a few years back after a tough year in Minnesota. The Wild sent him packing as Devan Dubnyk took over–as if we needed another irony, before coming to Minnesota he was Mike Smith’s backup in Arizona. After a year in Los Angeles where he backed up Jonathan Quick before he was acquired by the Coyotes. He started 55 games last year and turned in a very solid 2.33 goals against average and a .925 save percentage. That was just a warm up–Kuemper enters play tonight with the best goals against average (1.93) and save percentage (.935) in the NHL. The race for the Vezina Trophy is going to be ridiculously competitive this year and at this point Kuemper, Tuuka Rask and the Islanders’ Thomas Greiss are all in the mix.

The Coyotes are 5-4-1 in their last 10 games but are in a second place tie with Vancouver in the Pacific Division with 28 points–just 3 back of division leading Edmonton and just 5 back of the Western Conference’s best team the St. Louis Blues. Oddly enough, they’ve been better on the road (7-3-2) than on their home ice at the Gila River Arena where they’re 6-5-0. They’ve won 4 of their last 6 including victories at Washington and St. Louis. They lost 3-2 at Minnesota and dropped a 3-1 decision to Toronto at home in Sheldon Keefe’s first game as head coach of the Leafs.

The Kings have played better of late winning 4 of 5–all at home–with victories over Minnesota, Detroit, Vegas and Edmonton. They lost 3-0 to the Coyotes at Gila River on Monday though this doesn’t qualify as a ‘quick revenge’ spot since the Kings beat Edmonton 5-1 last time out. Love the situation with the better team coming off a loss and the Kings off a win. Coyotes win a textbook low scoring game. Arizona has gone ‘Under’ in 5 straight and 10 of their last 13, Kings ‘Under’ in 6 of 8 with 1 OV and a push.