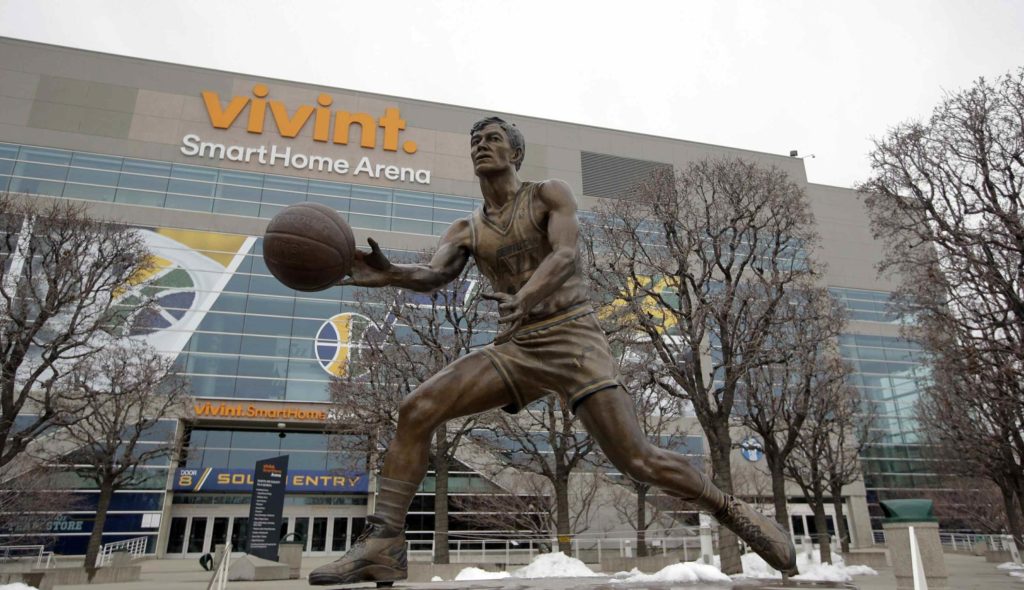 Big 11 game NBA card on Monday night and we’ll look at a Western Conference game between the Utah Jazz and Phoenix Suns. The Suns have opened the season with two wins in their first three games and have covered all of them. They beat the Sacramento Kings on opening night 124-95, lost a tight game at Denver 108-107 and upset the LA Clippers at home 130-122 on Saturday night. The win over the Clippers was a big deal for a couple of reasons–obviously LA is one of the public ‘darlings’ this season but it was also the first Phoenix victory over the Clippers in over three years. The Suns had lost 12 straight games prior to the victory. They’ve also won 2 of their first 3 games for the first time since 2015.

The Utah Jazz have also started this season 2-1 SU but just 1-2 ATS. They opened their season with a 100-95 home win over the Oklahoma City Thunder but failed to cover as a -9 chalk. They came back a couple of days later and lost 95-86 to the LA LeBron Lakers failing to cover as +3.5 road underdogs. They returned home the following night and eviscerated the Sacramento Kings 113-81, covering easily as a -9 point home favorite. They’ll get their shot against the LA Clippers at home on Wednesday when Kawhi and his posse visit the Vivint Smart Home Arena in Salt Lake City.

You have to appreciate the Suns’ spirited start to the season and particularly after starting center Deandre Ayton was suspended for 25 games after a positive test for a diuretic. This is a horrible tactical matchup for the Suns, however, and they’ll miss Ayton’s size and strength bigtime against the Jazz. Phoenix is a good offensive team but a miserable defensive team. They’ve benefited greatly from the tempo and style of the first three matchups. They scored 124 and 130 in their two victories and put up 107 in a losing cause against Denver. Phoenix might be worth a look against opponents willing to run and gun with them. They won’t find one here.

The Jazz had the #4 scoring defense in the NBA last year and even after that impressive showing found a way to significantly upgrade their defense in the offseason. Last year, the Jazz had a very good 45.2% opponent shooting percentage. So far this year they’ve clamped down even more–they’re the #1 scoring defense in the NBA allowing just 90.3 PPG. That’s nearly 4 points fewer than the second best defense, the Orlando Magic at 94 PPG against. In their first three games the Jazz have held every one of their opponents under 40% shooting. They held OKC to 38.6% shooting, the Lakers to 39.5% and the Kings to 37%. The Suns’ opponent shooting percentages look good but they’re more a function of poor shot selection by the Kings and Nuggets than any type of strong defensive effort.

Utah won’t even think of getting into an uptempo game with the Suns, instead they’ll rely on their primary strength which is nasty team defense. The Jazz have dominated Phoenix in head to head play in recent years and enter on a 7-1 SU/6-2 ATS run overall and a 3-1 SU/ATS run in Phoenix. Utah won and covered all four meetings with the Suns last year winning by an average margin of 24.75 PPG. Not surprisingly, the series has trended ‘Under’ by the same margin–6 games of the last 8 ‘Under’ along with 3 of the last 4 in Phoenix ‘Under’. 3 of the 4 games last year also went ‘Under’ the total. The total on this game is based more on Phoenix’s tempo this year instead of Utah’s and that’s a mistake–Jazz games have played to an average total of 190 or 27 points fewer than the posted total here.