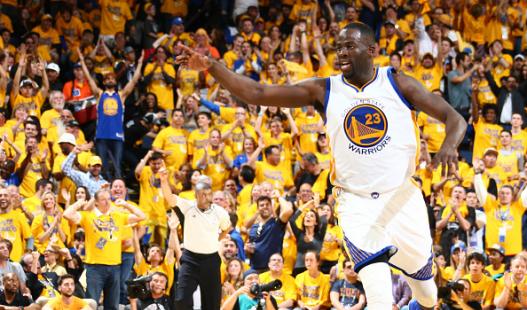 The Golden State Warriors obliterated the Cleveland Cavaliers in the first two games of the NBA Finals. The series now moves to Cleveland for Games Three and Four:

Congratulations to LeBron James and the Cleveland Cavaliers. Games One and Two weren’t only losses, and not just ‘blowout losses’. They may have been the worst two opening games of the Finals for a team in the history of the NBA. But the Cavs shouldn’t feel *too* bad–they’re just the poster children for the deplorable state of the NBA in general.

There’s usually nothing I hate more than sports writers who insist on weaving a personal narrative into a game or matchup analysis but I think I’m entitled to one. Plus, it’s appropriate here. I grew up loving the NBA. More specifically, I grew up in Salt Lake City, Utah watching the Utah Jazz transform from a bizarre transplant with a completely inappropriate name into one of the marquee franchises of the league. I was fortunate to watch the careers of in my opinion the two best to ever play their respective positions–power forward Karl Malone and point guard John Stockton. I’m pretty cynical about professional athletes these days but I can say with a straight face that it was a privilege to watch these two men go to work every night. Ditto one of the legendary coaches of the game, Jerry Sloan. Sloan was considered the toughest SOB in the league during his playing career and he was able to impart the same work ethic and toughness to his Utah teams.

I wasn’t the least bit surprised when Sloan said ‘screw it’ and went home to his farm in Southern Illinois. Were it not my job to handicap NBA basketball I would do the same thing. The NBA is pretty much unwatchable now. According to their press releases they’re making more money than ever. If this is true its a testimony to the marketing heft of ESPN. ESPN has given up any pretense of journalistic integrity, focusing entirely on the sports properties they own and completely ignoring the ones they don’t. They’ve all but ignored the Stanley Cup playoffs in favor of gripping stories like the Minnesota Timberwolves coaching search.

Which brings us to the handicap of this game. The NBA now is essentially 29 teams that range from ‘slightly worse than mediocre’ to ‘slightly better than mediocre’–and the Golden State Warriors. The Golden State Warriors are the Larry Holmes of professional basketball–a great champion that it’s tough to put into historical perspective due to the pitiful level of competition they face. Don’t get me wrong–the Warriors would be a contender in any era but it’s tough for me to think that they win 73 games in the era that Michael Jordan’s Chicago Bulls won 72. The NBA has reached a point where just playing as a team and showing up for 48 minutes every night is enough. That’s how the Warriors play and they’re the only team in the league this can be said about. Since they also have a brutally talented roster and a legit superstar in Steph Curry it’s not a surprise that they win all the time.

The Cleveland LeBrons…er…Cavaliers…are the personification of everything that is wrong with the NBA. LeBron James is a great player but he has a tendency to phone it in. He also has a tendency to think that the Cavs can win just by showing up. Golden State is one of the few legit *teams* in the league. Cleveland is a superstar surrounded with the best talent they can fit under the salary cap. I haven’t always appreciated Golden State and their excellence. I thought they were an overrated team. The reality is that they might be an underrated team. It’s hard to determine just how good they are simply because the rest of the NBA is such a grease fire. Never in a million years did I think I’d see the Los Angeles Lakers put such a lousy team on the court. Kobe Bryant probably couldn’t wait to be done with the sorry cast of characters around him. The Lakers have had some lousy teams before–some of you might be old enough to remember Magic Johnson’s abrupt retirement due to HIV back in 1991. The Lakers went from ‘Showtime’ with Magic to Sedale Threatt at point guard. But the 1991-92 Lakers with Threatt at point guard still went 43-39 playing in a Pacific Division that was so loaded that their four games over .500 record was only good enough for sixth place. The 2015-2016 Los Angeles Lakers went 17-65 including 2-14 in the Pacific Division and 8-44 in the Western Conference.

Golden State is doing what a championship team *should* do when playing against substandard competition night after night. They still insist on excellence when the other 29 teams are content with mediocrity. The Warriors finished 20 games ahead of the second place Los Angeles Clippers in the Pacific Division. When you finish 20 games up on a team with a 53-29 record you’re not just ‘doing something right’ you’re doing something amazing. That’s why this series is over. Historically, teams that lose Games One and Two of the NBA Finals on the road and play Game Three are 66% winners in that game. I don’t expect to see it here. There’s not another team in the NBA with the mental toughness and killer instinct of Golden State. They’re an amazing value here and I expect them to win Game Three and complete the sweep.