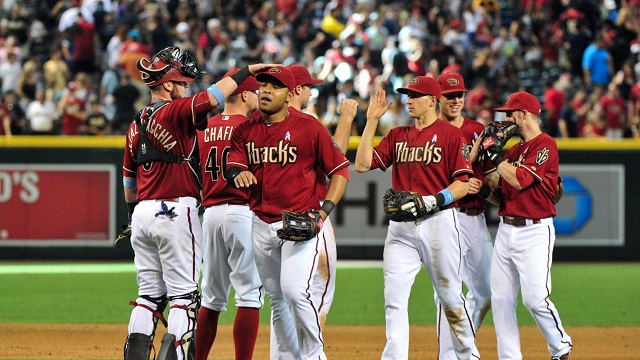 A big weekend of Major League Baseball action continues on Saturday. Here are our ‘best bets’ on the card:

Don’t look now, but someone woke up the Chicago Cubs. After a scorching hot start to the season the Cubbies were ‘treading water’ in late May but now it’s deja vu all over again. Chicago has won three straight and 9 of 10 and will try to keep their winning streak going against the Arizona Diamondbacks at Wrigley Field today.

Jason Hamel has been very good for the Cubs this season. Although he sometimes gets lost behind the other ‘A List’ names in the rotation he’s got great numbers this year. Chicago has won 8 of his 10 starts this year with a 2.09 ERA overall and a 1.83 ERA at home. Arizona’s starter hasn’t been quite as impressive–and that might be the understatement of the year. Lefthander Edwin Escobar was shelled in his only start so far this season lasting only 3 1/3 innings allowing 7 earned runs and 10 hits which gives him a bloated ERA of 18.92. There’s really no way that Escobar can be any worse here even facing the dominating Chicago Cubs. Then again, the reality is that were it not for injuries to the D-Backs rotation he’d be back in the minors.

The problem with a team like Chicago for a baseball betting enthusiast is that there’s no realistic way that they can justify their valuation. At the same time, it’s tough to pull the trigger on a play against them because they’re just so good. That’s starting to be apparent in their situational records. They’re 21-7 at home but have earned bettors just +6.3 units of profit. That’s not bad but for a team that is 14 games over .500 at home you’d expect to have made more money. They’re 11-4 against left handed pitching but that’s just +4.6 units in the black. They’re 18-8 in day games but that’s earned just +2.9 units of profit.

All you need to do to see what we’re talking about is a little bit of math. The Cubs are as high as -340 for this game and -300 just about everywhere. Implied probability at -340 is roughly 77.7% meaning that the Cubs have to win 78% of the time just to break even. Compare that 78% ‘breakeven percentage’ with several metrics–the Cubs have won 72.2% of their games this season. The Cubs are 21-7 at home which is 75% winners–still not high enough to earn any money at 78% implied probability.

But let’s look at the flip side of this coin and look at the breakeven numbers for the Arizona Diamondbacks at +260. At +260 the implied probability is 27.6%. Asking a Major League Baseball team to win at just over a once every four games rate isn’t particularly unrealistic. Back to the metrics–the Diamondbacks are ten games under .500 but that still puts them at 41.4% winners which would make a *ton* of money with a breakeven percentage of 27.6%. Arizona has been at their worst at home (9-20) but they’re a couple of games over .500 on the road.

One of the smartest things I’ve ever been told in my sports betting career: ‘Squares bet teams, sharps bet prices’. It’s tough to pass up this price.

At first glance you’ve got a matchup between a pair of teams trying to get above the ‘Mendoza Line. The issue here is recent form. The Phillies have been heading in the wrong direction losing 10 of their last 13 after a decent start to the year. The Brewers started the season in horrific form but have started to find some stability winning 7 of their last 11.

The disparate form of these teams are a good lesson for baseball bettors. It’s a long season and it’s tough for winning teams to keep winning night after night (though the Chicago Cubs appear to be an exception). Conversely, even the worst teams can win a few games here and there. Baseball is a process more than anything else–if teams do the right things and work the process correctly they’ll win 6 or 7 out of every 10 games and finish near the top of the standings. If they don’t work the process correctly they’ll lose 6 of 7 out of every ten games and finish neadar the bottom of the standings. If they don’t do it consistently they’ll alternate wins and loses.

For that reason, form is often everything in baseball. Milwaukee has shown a tendency to start slowly in recent years. Philadelphia isn’t ‘comfortable with winning’ yet–or to expand on the above commentary, they’re not fully vested in the process of playing baseball successfully. This is what we meant in the previous writeup about ‘not playing teams’ but playing prices. We don’t worry about the name on the front of the jersey, instead we concern ourselves with the numbers and other metrics they put up as it relates to the betting line. In a pick’em game the team in better form are the value side and that puts us on the Milwaukee Brewers.