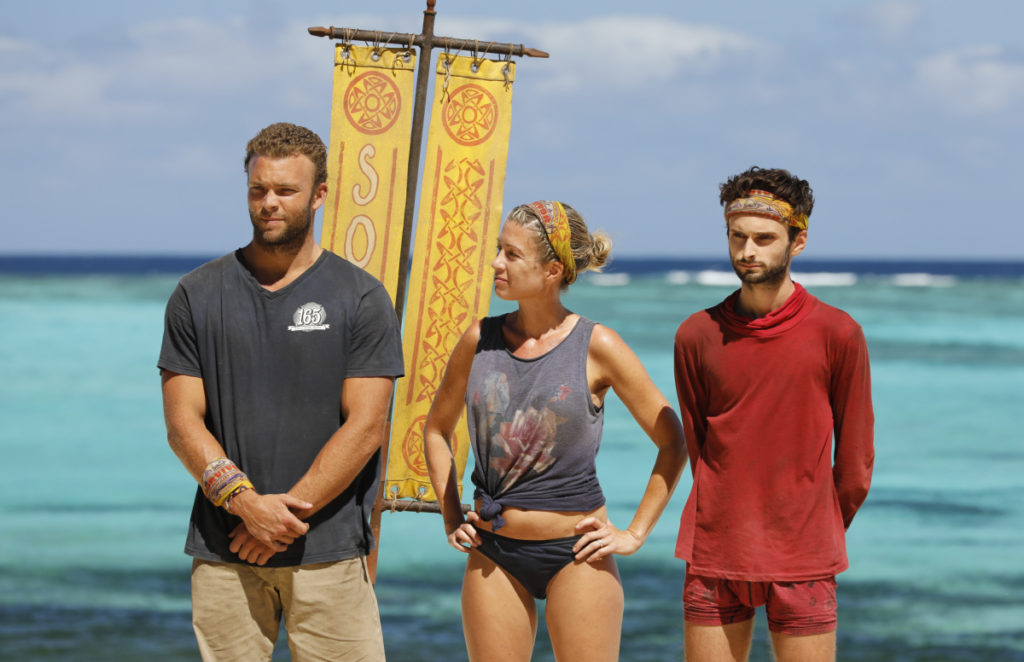 –This is the 35th season for CBS’s reality show.

–’Survivor’ was one of the early pioneers of the reality TV genre.

I have to admit that ‘Survivor’ is really starting to get on my nerves this season. Maybe the unwashed masses enjoy the show when it’s a complete grease fire where you can’t really understand what’s going on but it makes it exceedingly difficult for oddsmaking. So here’s what happened last week–Jessica Johnson was eliminated as our biggest longshot to get the ax (+5000). Joe Mena is quickly becoming the Jason Voorhees of ‘Survivor Season 35’ and remains alive though he’s still the top choice in ‘next to be eliminated’ odds market at +250.

Here’s what’s interesting–despite all of the inexplicable upheaval throughout the field the top three ‘To Win’ favorites have remained the same for awhile now. Ryan Ulrich remains our top choice at +225 followed by Chrissy Hofbeck and Ben Driebergen at +300. The biggest mover of the past week is Lauren Rimmer. Rimmer has been at our near the top of our ‘next to be eliminated’ market for most of the season but is now the fourth choice to win it all at +500. Rimmer has stayed out of everyone’s way which often can be the ticket for an early exit. On the other hand, if this is played correctly it can keep you in the game until the field gets cut down to a reasonable number at which point you can go to work.

The bigger problem with Jessica Johnston’s elimination is that the ‘Survivor’ Season 35 field is becoming a real ‘sausage fest’. Entering Episode 8 there are 11 contestants remaining–7 male, 4 female. Johnston was also our favorite in the ‘next to be pixelated due to nudity’ market. I can’t imagine that ‘Survivor’ would be moving away from gratuitous pixelated nudity after 35 seasons but things have been decidedly tame this season.

The ratings for Episode 7 were little changed from the week before when the World Series Game 7 theoretically took a bit chunk out of the viewership. Not sure what the deal is this week but rating was the same as the previous week and the viewer count saw only an incremental boost to 7.82 million. The thinking last week of why ratings were down from the previous week was the massive ratings of the final game of the World Series. World Series Game 7 did a huge 8.2 rating with a 29 share and 28.24 million viewers meaning that losing just over a half million out of the Episode 5 audience was pretty impressive. The fact that they’ve yet to regain the audience they had prior to Game 7, however, is significantly less so.

WHO WILL BE ELIMINATED IN EPISODE 8?

WHO WILL WIN REWARD IN EPISODE 8?

WHO WILL WIN IMMUNITY IN EPISODE 8?

WILL A HIDDEN IDOL BE PLAYED IN EPISODE 8?

WILL ANYONE QUIT/BE REMOVED FROM ISLAND DUE TO INJURY IN EPISODE 8?

WILL A CONTESTANT BE ‘PIXELATED’ DUE TO NUDITY IN EPISODE 8?

WILL A CONTESTANT BE ‘PIXELATED’ DUE TO NUDITY BETWEEN THE BEGINNING OF EPISODE 8 AND THE END OF SEASON 35?

GENDER IDENTITY OF NEXT CONTESTANT TO BE ‘PIXELATED’ DUE TO NUDITY?

NEXT CONTESTANT TO BE ‘PIXELATED’ DUE TO NUDITY?

In the previous four propositions pixelation must be due to accidental or intentional nudity and not due to obscene gestures or any other reason. Official information source for grading the previous for props is PickPete’s fantasy game recap.