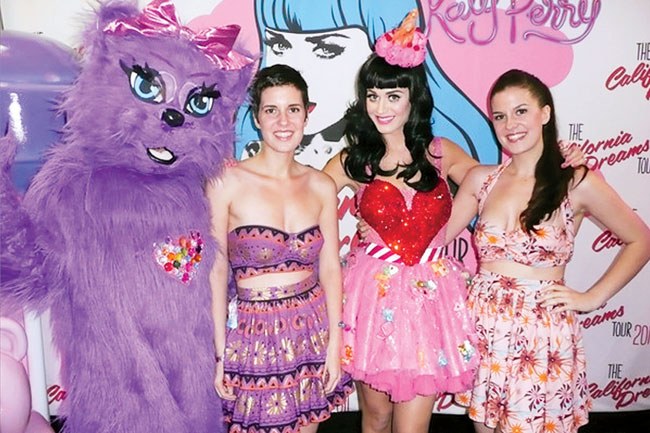 Episode 7 of ‘Project Runway’ had what pro wrestling geeks call a ‘screwjob finish’. Instead of two designers being eliminated it turns out that *no* designers were eliminated. At least not yet. The Buitendorp Twins would have been sent packing were it not for an act of God…er…act of Heidi Klum who decreed that the two girls will go ‘mano a mano’. Translated–they get an hour to re-do the Episode 7 challenge and whoever has the best design will stay. TVLine.com is expecting some good television out of what looks like the ‘end of the line’ for the Buitendorp Twin train wreck:

Unfortunately, the judges couldn’t decide which twin to send home, prompting Heidi Klum to announce a do-over challenge — Claire and Shawn will each get one hour to design a new menswear-inspired look. (Wait, why did I say “unfortunately”? This is going to be amazing!)

So best as I can figure Episode 8 will feature the Buitendorp Twins bloodbath *and* the scheduled challenge with the other contestants. I’m also assuming that there will be two eliminations this week–Shawn/Claire Buitendorp and a designer from the remaining group. It’s hard to figure out what is going on from what transpired on the show and the ‘Project Runway’ press. That’s why ‘No One Eliminated’ is at such a short price this week. I’ve also added the proviso that the ‘Episode 8 elimination’ market does not include the American fashion industry’s favorite twins. They’ve got their own odds for their head to head matchup.

The ‘To Win’ odds for Season 16 have changed a bit following Episode 8 despite no eliminations. Margarita Alverez won the Episode 7 challenge and I’ve moved her up to the second favorite spot priced at +250. Brandon Kee is still the favorite, now at +200 to win. Ayana Ife has dropped to third choice at +450. She’s got an interesting ‘scoring line’ this season. She won the Episode 2 challenge but has been right in the middle of the pack in the other six episodes. Yep, no highs and no lows. Kenya Freeman has been dropped down to the fifth choice to win at +1000 odds. I can’t figure her out for the life of me. She was top three in the first two episodes, middle of the pack in Episode 3, bottom 3 in Episode 4, runner up in Episodes 5 and 6 and bottom 3 once again in Episode 7.

I might have to re-price Kentaro Kameyama after Episode 8. He was decidedly mediocre for most of the season but he has a win and two top 3 finishes in his last four designs. Here’s what we do know–there are only two designers not named ‘Buitendorp’ with more than one ‘Low’ finish. That’s the aforementioned Kenya Freeman and Amy Bond. Bond doesn’t have any ‘High’ finishes so I’m making her the top choice to be eliminated from the ‘Non Buitendorp field’ in Episode 8. Freeman’s two lows should put her at risk for elimination but there’s a problem with that–her four ‘High’ top 3 finishes is more than anyone except favorite Brandon Kee who has five (2 wins, one runner up, two top three finishes). My gut instinct tells me that Freeman’s inconsistency of late is a bad thing. She’s clearly got some design chops but with the field getting smaller so too does the margin for error.

Here’s the updated odds to win Season 16 of ‘Project Runway’ along with the odds for Episode 8:

WHICH BUITENDORP TWIN WILL WIN THEIR ‘HEAD TO HEAD CHALLENGE’ IN EPISODE 8 OF ‘PROJECT RUNWAY’?

If no designer is eliminated other than either or both Buitendorp Twins the bet will be graded ‘No One Eliminated in Episode 8’.

WILL TIM GUNN USE HIS SAVE IN EPISODE 8?

WILL TIM GUNN SAY ‘GATHER ROUND’ IN EPISODE 8?

WILL TIM GUNN SAY THE WORD ‘FABULOUS’ IN EPISODE 8?

WILL TIM GUNN SAY THAT HE’LL ‘MISS’ ANY ELIMINATED DESIGNER?

WILL TIM GUNN USE THE EXPRESSION ‘LOT OF LOOK’ IN EPISODE 8?

WILL TIM GUNN SAY THAT HE IS ‘WORRIED’ OR ‘CONCERNED’ ABOUT A DESIGN IN EPISODE 8?

WHO WILL BE ELIMINATED FIRST?

WILL EITHER BUITENDORP TWIN MAKE REFERENCE TO KATY PERRY?

WILL EITHER BUITENDORP TWIN USE THE WORD ‘INDEED’ IN EPISODE 8?

WILL ANY JUDGE SAY THAT A DESIGN ‘LOOKS EXPENSIVE’ IN EPISODE 8?

WILL ANY JUDGE SAY ‘I WOULD WEAR THAT’ IN EPISODE 8?

WILL ANY JUDGE SAY ANYTHING QUESTIONING ‘WHO SOMEONE IS AS A DESIGNER’ IN EPISODE 8?

WILL ANY CONTESTANT SAY ‘THIS IS A COMPETITION’ IN EPISODE 8?

WILL ANY CONTESTANT USE THE EXPRESSION ‘WHO I AM AS A DESIGNER’ IN EPISODE 8?

WILL ANYONE ON THE SHOW USE THE EXPRESSION ‘MAKE IT WORK’ IN EPISODE 8?

WILL ANYONE ON THE SHOW USE THE EXPRESSION ‘PROJECT SEAMSTRESS’ IN EPISODE 8?

WILL ANYONE ON THE SHOW SAY THE WORD ‘MATRONLY’ IN EPISODE 8?

WILL ANYONE ON THE SHOW USE THE TERM ‘MALL CLOTHES’ OR OTHERWISE SUGGEST THAT AN OUTFIT LOOKS LIKE IT CAME FROM THE MALL IN EPISODE 8?

WILL ANY DESIGNER SUFFER AN INJURY IN EPISODE 8?

WILL ANY DESIGNER CRY ON CAMERA IN EPISODE 8?

KEY DEMO RATING FOR EPISODE 8 AS REPORTED BY ‘TV BY THE NUMBERS‘?

TOTAL VIEWERSHIP FOR EPISODE 8 AS REPORTED BY ‘TV BY THE NUMBERS‘?