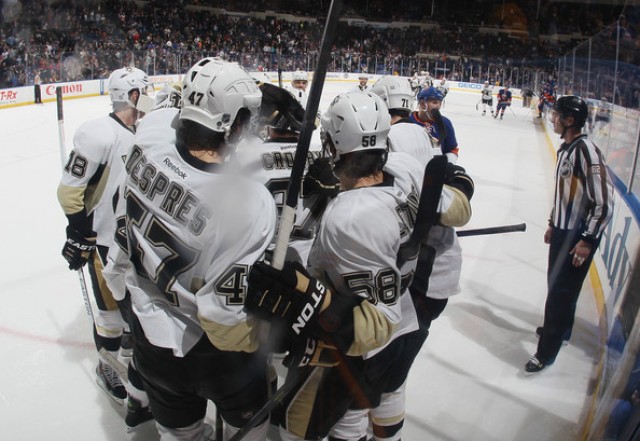 Huge day of hockey action with thirteen games on the board. Here are our best bets:

How soon they forget. The Washington Capitals have had the Metropolitan and Eastern Conference locked up for what seems like months. All of a sudden the Pittsburgh Penguins catch fire and now they’re being anointed as the team to beat in the Stanley Cup playoffs–even the Washington area media is getting on their bandwagon. The betting marketplace is a better reflection of reality and Washington is still the top choice at most sportsbooks.

Pittsburgh is leading a ‘charmed life’ at the moment. How many teams lose their starting goalie only to discover that the best netminder in the organization might have been playing in Wilkes-Barre of the AHL all season? That would be Matt Murray who has put up ridiculous numbers in his short time as the Penguins’ starter. How good is Murray? Good enough that he’s already been named the Penguins’ starter after Marc-Andre Fleury returns from injury. Murray is just 21 years old and is clearly the goalie of the future in Pittsburgh.

The Penguins have been a different team under head coach Mike Sullivan and enter this contest having won seven straight. The Capitals are still the ‘team to beat’ in the playoffs but they’ve got no reason to ‘make a statement’ here–even if they were capable of doing so. We’ll take the surging Penguins as small dogs.

Final regular season game of the season between these longtime rivals. In theory, the fact that only two points separate the teams in the standings should make it all the more intense. In reality, however, the motivation in this game is a question mark. The Rangers are in third place in the Metropolitan Division three points back of the red hot Penguins but would have to win out to even have a chance at catching them. With the format of the NHL’s playoff seedings the Rangers and Penguins would still play in the first round only with the Rangers having home ice advantage. The Islanders have clinched a wildcard spot and for them it’s a ‘pick your poison’ situation. They could catch the Rangers but that would mean they play Pittsburgh in the first round instead of the Washington Capitals. Neither situation is a cakewalk though my gut reaction is that you’d rather play a Washington team that has been on ‘cruise control’ than the Pittsburgh Penguins who are the hottest team in hockey.

Absent any intrinsic motivation we’ll go to the scorecards. Actually, we’ll go to the past performance data which shows that the Islanders have won 6 of the last 8 at Madison Square Garden. We’ll take them as ‘road’ underdogs.

Big game for both teams–a Detroit win will clinch yet another playoff spot for the Red Wings. Detroit has appeared in the Stanley Cup playoffs for twenty five straight seasons which given the level of parity in the NHL over the past decade or so is amazing. Wrong team is favored here. Boston has the third worst home record in the NHL–only Toronto and Vancouver are worse on home ice. The Bruins have also been in miserable form of late losing 7 of their last 10 games (2-7-1) while the Wings have been playing well (7-3-0 L10).

Blues not only the better team but this game is much more important to them. In all fairness, the Blackhawks have been playing reasonably well of late (6-3-1 L10) but its doubtful that they’ll want to exert too much energy until the playoffs start. Lot of injuries on the Blackhawks side with Andrew Shaw and Corey Crawford out indefinitely. Artem Anisimov is out and Marian Hossa is listed as ‘questionable’ here while top defenseman Duncan Keith is serving a suspension until Game Two of the first round of the playoffs. Perennial scapegoat Bryan Bickell has been recalled from Rockford of the AHL to help give the team some depth.

St. Louis is in a different situation–they’re tied atop the Central Division and Western Conference with the Dallas Stars. Both teams have 105 points, both have two games remaining. The Blues will have no problem taking advantage of the Hawks injury situation and have to keep winning if they want to keep pace with Dallas since the Stars have the tiebreaker.