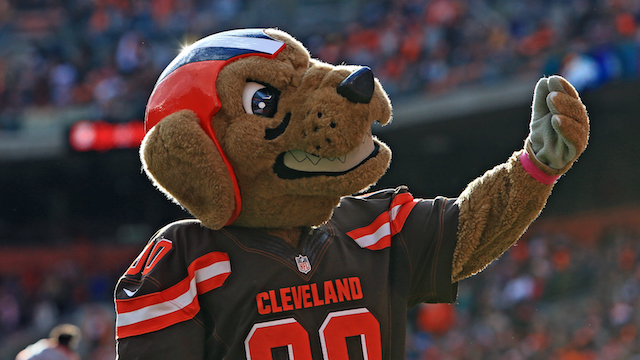 –The Cleveland Browns stand at 0-12 on the NFL season.

– They had a bye this past weekend and have four games remaining.

– Since 1945 only four NFL teams have finished a season winless.

Will the Cleveland Browns finish the 2016 NFL season with a record of 0-16?

THE GOOD NEWS? THE CLEVELAND BROWNS DIDN’T LOSE THIS WEEKEND

This is, of course, the answer to a trick question–they couldn’t lose this weekend because they had a bye. After a loss last weekend to the New York Giants they got a much needed respite and the opportunity to re-focus for the remaining four games of the season. As far as these things go, the Browns have a decent opportunity to win one of their final four games and avoid becoming the fifth NFL team since 1945 to complete a winless regular season. The favorable schedule down the stretch combined with a semi-tolerable performance in their loss to the Giants last week are the reasons that I’ve moved the line slightly on the ‘Winless 2016 Season’ prop bet odds. Not a particularly significant move from our previous update on November 20:

You’ll also notice that I’ve added some implied probability numbers with the updated odds. You have to promise me that you’ll use these numbers correctly. Here’s what they *don’t* mean:

“Sports Betting Experts’ oddsmaker Jim Murphy says that the Cleveland Browns have a 63.64% chance of avoiding a winless season.”

There’s one essential thing to keep in mind anytime you see betting odds, pointspreads or whatever–they’re not trying to ‘predict’ the outcome of the game or other proposition. On the bookmaker’s side of the counter you don’t get ‘brownie points’ for correctly ‘predicting’ the outcome of a game. When I set odds my goal at the theoretical level is to split the action that I attract with these numbers. This is part art, part science and there is a predictive component to these numbers to be sure. In a perfect world, I’d know two things before I set prices:

—The True Odds of the Proposition:

—The Public’s Perception of the Proposition:

With this information I could set a nasty price on every game. There’s one big problem–it’s impossible to get a completely accurate read on both of the above factors. Actually, there are occasionally betting propositions where I can determine the ‘true odds’. For example, the coin flip before every NFL game. Other than a few rare exceptions, however, I’m just trying to get in the ‘ballpark’. Public perception is even trickier to deduce but that’s actually the more important component of the oddsmaking equation. I’ll repeat something that you’ve heard me say often–as an oddsmaker I’m more concerned with handicapping how the public feels about a betting proposition than I am the betting proposition itself.

If this isn’t making sense let’s go back to basics–think of a coin flip which we can all agree is a 50/50 proposition. The way you write this on the moneyline (with implied probability) is as follows:

Easy enough. But If I’m running a sportsbook and paying ‘true odds’ on everything I won’t be in business long. I’ve got to pay the bills plus I have expensive tastes and a trophy wife to keep happy. Spoiler alert–bookmaking is a ‘profit deal’. So we’ll factor in some vig and make it -110 on each side:

52.38 + 52.38 =104.76 and that 4.76% goes into the bookmaker’s pocket (assuming he has balanced action on this bet). Let’s modify it a little more–let’s say that there’s some data making the rounds that a particular referee has thrown ‘heads’ ten straight times. Obviously, this has no bearing whatsoever on the next coin flip but we’ll assume that the betting public for this game slept through every math class they took in high school or college. The book gets a ton of action on this coin flip landing ‘heads’ and as a result adjusts the line to:

Will the Cleveland Browns finish the 2016 NFL season with a record of 0-16?