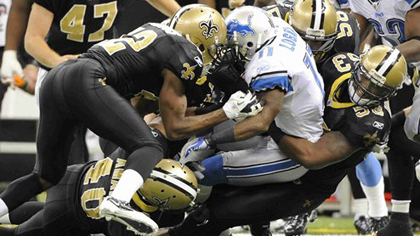 When the Lions travel to New Orleans to take on the Saints, there will be a lot of storylines to talk about. For one, the Saints—who will be coming off of a bye week—will be looking to edge above .500 since the 2013 season. Seeing as Drew Brees has been at the helm of New Orleans that whole time, this is a stat that might be very difficult to believe. Despite that, the Saints are looking like a team that, if nothing else, might be able to contend for a Wild Card spot. We have a long way to go until that can be said with any real confidence, but having a win over the Falcons will make a team feel invincible; especially when you consider the almost nonexistent defense of New Orleans.

The Lions may have an underwhelming 3-2 record, but their 2 losses were by a combined total of 7 points and at the hand of teams that are also likely playoff contenders. For some, the most telling aspect of the Lions’ two losses is that, for one, they both came against teams in the NFC South, and, secondly, one of those losses came against a team the Saints defeated—the Falcons. While the fact that these two teams have different results against a similar opponent may seem very significant, I and most other people are not buying it.

With all of this being said, I do think this game will be a lot more interesting than most people might have thought when the schedules were first released. The Saints are definitely lacking on the defensive side of the ball, but the Lions may be without their star quarterback so the playing field might be a bit more level. All in all, this is going to be a great game with a great atmosphere.

The +4 (-110) Lions (+175) will head to New Orleans uncertain of how much of an impact their star quarterback, Matthew Stafford, will have on the game. During the final minutes of the Lions’ game last week with the Panthers, Stafford was limping very badly. There has been very little updates on his injury, but he is currently listed as a game-time decision for Sunday. Regardless of whether Stafford is in or not, it is safe to assume that he will be a different player than the one we have grown accustomed to. Jake Rudock, a player in his second season and with almost no experience, is Detroit’s backup, and that should be a thought that sends shivers down the spines of Detroit fans.

If you add Detroit’s quarterback problems to the fact that Hagoti Ngata was injured a few weeks ago, the rest of the season is growing increasingly bleak for the Lions. Ngata was widely regarded as both the best defensive lineman and best overall defensive player on the Lions, and it is widely believed that his presence will have an adverse impact on the rest of their season.

The -4 (-110) Saints (-205) will be favored heading into this game and will have a lot of momentum under their belt. Not only will they be well-rested thanks to their bye week, they will be entering this matchup on the back of 2 consecutive victories. Drew Brees is a major part of their current record as he is completing nearly 70% of his passes, has 8 touchdowns, and has not thrown a single interception. As you could have probably guessed, their rushing attack has been nothing to write home about, but if no one can stop them through the air I suppose that does not matter much, especially not in the pass-first NFL.

If Stafford is going to start the game and play at a competent level, the Saints’ defense will be in trouble. If Stafford is limited or does not play at all, I think this game will become a lot more tilted in the Saints’ favor. I think New Orleans can compete with the Lions’ rushing attack, but a healthy Stafford will undoubtedly present problems. No matter what way you flip it, this game will be an interesting one.

I do not love the moneyline odds offered by BetOnline, but I think the Saints (-205) are going to win this one. I think they have the better quarterback and will be in front of a crowd that has present nothing but problems for opposing teams.

As far as the point spread is concerned, I think it is worth taking a risk on the -4 (-110) Saints. I generally hate the 4-point spread, but I think the Saints’ offense will get on a roll and ultimately bury the Lions.

Finally, the over/under is currently listed at an even 50 points (-105/-115) and I think you should stick with the under (-115). I feel this way because I think Stafford will either not play or not be nearly as effective as he usually is.