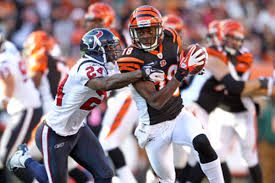 After Week 1 of the 2017/18 NFL season, the Bengals and Texans have one thing in common: they are both 0-1. The Bengals, though favored, ended up being embarrassed by the Baltimore Ravens by a final score of 20-0. While I would like to touch on the positive aspects of the Bengals’ season opener, the truth of the matter is that there were not very many. The Bengals were greeted with incredibly high expectations, and after one week their fan base is still wondering what hit them.

In their opening game, the Bengals really couldn’t do anything correctly. The pass game was ineffective and, in turn, their offense sputtered, stalled, and was shut down almost entirely. The Cincinnati defense did not play particularly poorly, but when you consider just how frequently they were called into action due to offensive turnovers, it is easy to understand why the Ravens eventually found their way to points.

The Texans’ season opener did not go much better than that of the Bengals’. Houston fans, unlike Cincinatti’s fans, did not have such high expectations heading into this year, but there was general consensus that they would likely be able to defeat the particularly weak Jaguars; that did not happen. The Jacksonville Jaguars’ defense played well above expectations and kept the Texans in check throughout the whole game. A halftime quarterback switch did not help the Texans’ cause entirely too much as they only managed one touchdown in the second half. By the time the game had come to an end, the Texans were soundly defeated by a score of 29-7. Their hopes will be high, but after losing to the Jaguars few Texans fans will have all that much confidence heading into Thursday’s primetime matchup.

When the -6.5 (-112) Bengals (-280) take the field on Thursday night, they will do so as heavy favorites. Their first performance may make this difficult to understand, it is not always the best decision to judge a team based on their opening week performance. In all reality, the Bengals are a solid team with plenty of offensive power, and a defense that plays in one of the toughest divisions in football. Once more, I expect the Bengals to stick to the pass-first offensive scheme. Last week, QB Andy Dalton had perhaps the worst game of his career when he threw 4 interceptions and fumbled the ball once. Add to that the fact that he did not have one passing touchdown, and it is easy to see why the Bengals’ offense never got going.

AJ Green and Tyler Eifert make up the most threatening of Dalton’s options, but he is not limited to just the pass. The three-pronged attack of Jeremy Hill, Giovani Bernard, and rookie Joe Mixon have all gotten touches and it is looking like this will be a theme all season long. To make a long story short, so long as the offensive line can do its job I think the Bengals will be just fine.

As for the +6.5 (-108) Texans (+235), we are still unsure who is going to start at quarterback. Relative veteran Tom Savage is still listed as the number 1 quarterback, but rookie Deshaun Watson made his way into the game at halftime of their game with the Jaguars. What’s more, the NFL announced today that star linebacker Brian Cushing will be suspended for 10 games because of his supposed PED use. All things considered, the Texans’ season seems to be crashing and burning before their second game.

While I would normally say that the Texans’ defense will, without a doubt, be fine, the loss of Brian Cushing is a massive one. According to the Texans’ depth chart, rookie Dylan Cole will be making the start at the all-important inside linebacker position. JJ Watt will always be a test for opposing offensive lines, but I think the Bengals might have some success on offense, if not a lot of success.

BetOnline lists the Bengals (-280) as heavy favorites on the moneyline, and I have to agree. While the -280 odds do not give you much value, I think the Bengals -6.5 (-112) point spread is another safe bet. The Bengals will be playing at home, which helps, and I think they have the better all-around team, by far. The two offenses do not even compare, and with the loss of Brian Cushing the Texans’ defense will be stretched thin.

The over/under for this game is listed at a fairly low 38 points (-110/-110), and this is an extremely tough call to make. I think the over (-110) is the better of the two picks simply because I think the Bengals’s offense is going to run absolutely rampant. Andy Dalton was held back last week and I think he is going to be encouraged to go out and get after it.