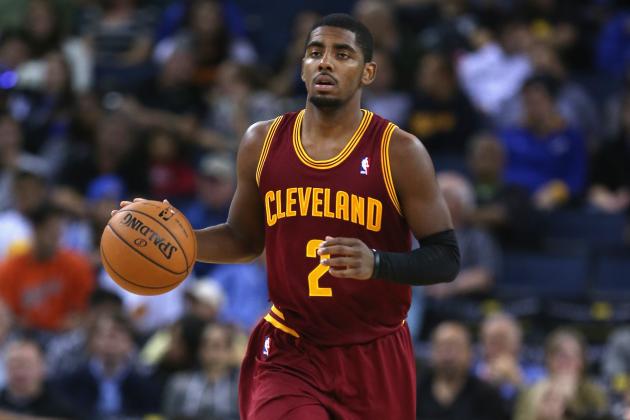 The Cleveland Cavaliers’ rocky offseason just got even tougher after Kyrie Irving requested a trade.

We covered a number of reasons why Kyrie wants out of Cleveland. And when you look at the facts, it seems like being traded would be the way to go.

But let’s also look at 10 reasons why Irving could be making a huge mistake by requesting a trade.

1. Cleveland is Favored to Make the NBA Finals

The Cavs have made the NBA Finals three straight years. And they’re favored to make it a fourth straight year in the 2017/18 season.

Of course, this is only if they have Irving teaming up with LeBron James and Kevin Love. But will they?

One reason why Kyrie may want out now is because the Golden State Warriors are heavy favorites to repeat. But injuries happen, meaning there’s no guarantee that the Warriors will win. 2. Irving Plays with a Great Player who Covers His Deficiencies

Kyrie Irving is largely considered a top-15 player. He gets to the rim with ease, converts, and can shoot outside.

But he has one glaring deficiency: his defense. This isn’t to say that Irving is the NBA’s worst at defense. But he certainly doesn’t make the All-Star team for his ability to guard.

LeBron helps cover for this, though, because he is an outstanding defender. This makes James a great compliment to Irving. 3. There’s No Guarantee Irving will be the Man Somewhere Else

One of the biggest reported reasons for Irving’s trade request is that he’d like to lead a franchise. And he certainly has the ability to do this. But lets look at his list of preferred teams:

We could definitely see Irving being the man in Miami. But would they win enough?

This makes it unlikely that Irving would get his wish to have the biggest role – unless he’s traded elsewhere to a team not on the above list. As Colin Cowherd points out, every reason why Irving wants traded is a “first-world problem.”

Wanting to be the star, not controlling the ball enough, and almost being traded are not great reasons to be want to leave a serious contender. If Irving goes to San Antonio, we can be pretty sure he’ll win 60-some games. But beyond this, there’s no guarantee he’ll win with another team.

First off, Irving suffered through 3 straight losing seasons in Cleveland before LeBron came. This makes it questionable whether he can lead a subpar or average team to the promise land.

No matter where he goes, chances are low that he’ll experience the success he’s had in Cleveland any time soon…if ever. 6. Playing by Yourself is Hard – Ask Russell Westbrook

I’m certainly not doubting that Irving is a great player. But if he goes somewhere like the Phoenix Suns, he’ll not only be the man, but also carrying the team on his back.

Maybe he should ask Russell Westbrook or Anthony Davis what it’s like to carry a team when you have limited weapons.

Irving might steal headlines and get numbers on a lesser team. But he doesn’t have the LeBron-like ability to get Ws by himself. 7. Lebron may Stay (for Better or Worse)

Wishing to be out of LeBron’s shadow is one reason why Irving wants traded. But Jason McIntyre thinks that it also has to do Irving wanting to get ahead of things.

But we don’t have 100% confirmation that James is leaving. And if he re-signs, then the team will continue being very good for the foreseeable future. 8. He’d Be the Top Option in Cleveland at Some Point

James is 32. Kyrie is 25. At some point, Kyrie will take over this franchise if he continues playing here.

That said, he can win now, then be the team’s top option/ball handler when Jame leaves or retires. If Irving wants a larger role, then what’s his complaint about Cleveland?

He ranked sixth last season in field goals attempted with 19.89 per game. This ranked only behind Westbrook, DeMar DeRozan, Davis, Damian Lillard, and DeMarcus Cousins.

Given that not one of these players advanced past the conference semi-finals, it’s not always good to shoot the most.