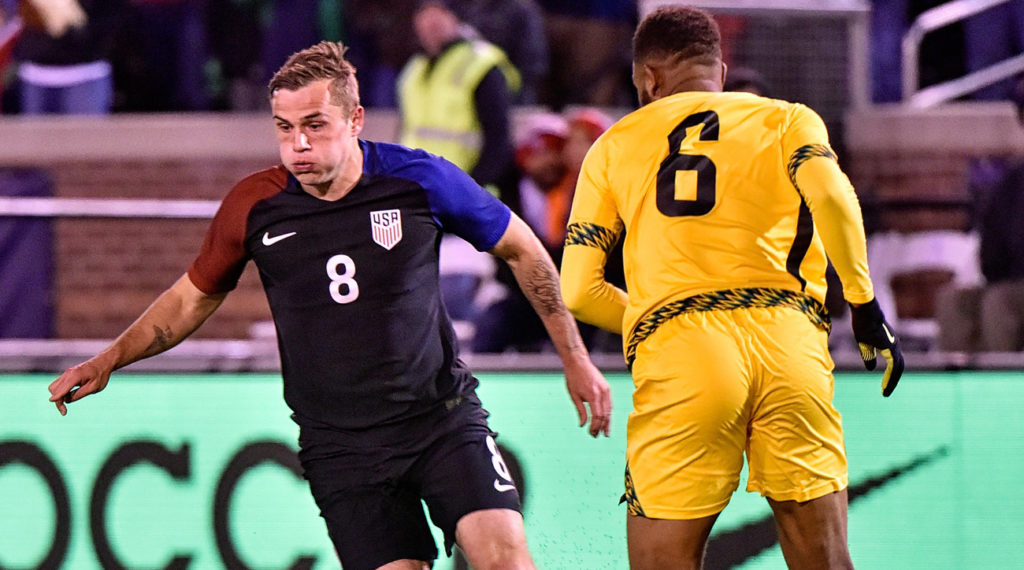 When the United States meet Jamaica in California on Wednesday night, it will be the second time in as many Gold Cups where Jamaica played in the final. Back in 2015, the Reggae Boyz miraculously advanced to the Championship match only to be ousted on a 3-1 scoreline to Mexico. This time around, Jamaica’s journey to the final saw them play Mexico again, however an 88th minute free kick saw the Jamaicans advance through by a final score of 1-0.

All tournament long, it has been Jamaica’s defense that has propelled them. Goalkeeper Andre Blake, of Major League Soccer’s Philadelphia Union, now has 3 shutouts in 4 matches and has been, by far, the best goalkeeper in the tournament. Jamaica’s goal scorers, though clutch, have not done all that much if we are being honest. Against the United States, this will have to change if they want any realistic shot at raising the trophy at match end.

To say the United States cruised into the Gold Cup final would be very far from the truth. The fact of the matter is that they struggled their way through the group stages. Putting the United States’ struggle perfectly into perspective is the fact that they were only narrowly able to defeat Martinique, a tiny island nation that does not even have a FIFA-sanctioned team. With that being said, however, a large win on the final day of group play saw them win their group and advance to the quarterfinals, where they met El Salvador.

Though there were definitely some nervy moments against the Central Americans, the United States ended up brushing the El Salvadorians aside by a 2-0 scoreline. At this point, however, the US roster had changed significantly, and more familiar names were playing. This seems to have been the correct move to make, seeing as the US have looked very good in their last 2 matches.

As for Jamaica (+650), their chances are not the best in this one. What we know is that they are a great counter-attacking team and are competent in defense, mostly thanks to the play of Andre Blake between the pipes. If they want to have any chance against the United States on Wednesday, their only hope is to get an early goal. If the team from Jamaica can score and set 11 men behind the ball for the duration of the match, they have a shot.

If this becomes an open game where players are freely roaming the pitch, I am going to have to say that this would play heavily into the hands of the United States. The US are more technically gifted, organize themselves better, and are more effective in front of the net. These are the reasons they made it this far, and is a major part of the reason as to why they are so heavily favored.

Another tactic Jamaica could try to pursue is to simply sit back and defend for the entirety of the match. If they can keep the US (-200) out of the net, and the game moves on to penalties, the playing field will be evened significantly. In my opinion, the first US goal will be the death of Jamaica. Should the United States get on the board early, this will force the Jamaicans to push higher up the pitch, thus leaving themselves susceptible in the back. While we should applaud the Caribbean team for making it this far and defying the odds, the United States will be a test that not even Mexico would have matched up with very well.

If you are looking at a moneyline bet to place, Bovada currently lists the United States at -200 odds. While I do not think that these are the greatest odds in the world, I do encourage you to place a sizeable bet as I think the US will win, within 90-minute regulation, with ease. If they can come out and link passes together like they did with El Salvador, a win and a trophy are all but guaranteed.

The over/under is listed at an even 2 goals (-125/+105). I think you have to take over 2 goals in this one. I know Jamaica will more than likely come out with a defensive mindset, but I think the US are still going to net a few. Plus, the even over/under offers you the opportunity to push should the score end 2-0 or 1-1.

There is a first half moneyline also being offered by Bovada. The United States’ odds of being ahead of Jamaica at the halftime interval are +115. I truly think that the US will have little to no problems winning you this bet, and I highly recommend it.

Finally, the US are -500 to win the Gold Cup. This bet is different than a moneyline wager because you will still win even if it takes extra time/penalties to decide the match. Though this is a smart wager to make, you must be careful because you will have to risk a lot to win any sizeable amount of money.