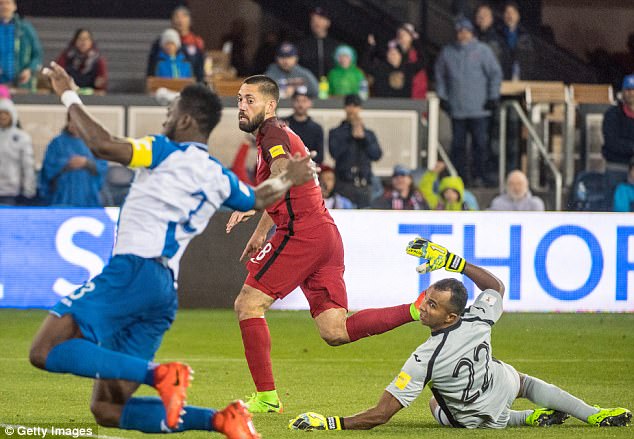 When the United States take the pitch on Tuesday in Honduras, they will do so on the back of an embarrassing defeat at the hands of Costa Rica. In case you did not see, Costa Rica stormed into Red Bull Arena and walked away with all 3 points on the back of a 2-0 victory. In short, the United States looked uninspired and disorganized, especially in the back. Defensive mistakes combined with offensive incapability resulted in the US getting embarrassed.

Honduras, on the other hand, stormed to an early 2-0 lead against Trinidad & Tobago and were able to hold onto all 3 points thanks to a 2-1 victory. These 2 sides are now even on points, with the US sitting in the better position thanks to their superior goal-differential. As such, the United States know that they only need a single point from the Honduras match in order to stay in a position that would see them qualify for next year’s World Cup.

As it stands, the United States are third in the group and retain the last World Cup Qualifying position. Honduras are in 4th and, if these positions hold through the end of the qualifying period, will face a 2-leg playoff with an Asian team in order to qualify. As it stands, Honduras would face Uzbekistan in a 2-leg playoff. Of course, Honduras wants to avoid this if possible, so they will be entering this match hoping to secure all 3 points. If they mimic Costa Rica and come out of the gates looking to hold their own and get on the front foot, they may be able to take advantage of a US team that appear to be far from their normal selves. Of course, Honduras will be fully aware of the fact that they are the less technically talented team, and will need to bide their time rather than throwing caution to the wind straight from the opening whistle.

What should scare the United States (+124) is the sheer speed of the Hondurans. The US may be technically gifted—especially in the midfield—but the reality of the matter is that the US are not the paciest team out there. With the way Honduras can send backs down the flanks to send in crosses, the US will want to be sure to not get pushed too far forward. What’s more, with the way the back line played last Friday, Honduras (+215) will be licking their chops and will want to get into the final third as early and as often as possible.

For the United States, the biggest issue will be solidifying their defense. Whether it was simple incompetence or the fact that dumb mistakes were made, the United States’ defense looked to be lacking in all areas.

If the United States can gain some fluidity across all 3 parts of the pitch, I truly do not think they will have much issue taking care of Honduras. If players like Michael Bradley, Darlington Nagbe, and Christian Pulisic can dominate the midfield unlike they did on Friday, there will be no issues. Of course, these are big ifs.

Bruce Arena very well might make some changes to his starting lineup, and the thinking is that Tim Ream will make way for Matt Besler in the back. Tim Ream looked to be, quite possibly, the worst player on the pitch for the United States on Friday. He defended poorly, and was an integral part of Costa Rica’s goals, for all the wrong reasons. Though it is not always wise to make such big shifts in the defense like this, I think there is no way the US will succeed with Tim Ream in the lineup.

BetOnline currently lists the United States (+124) as moneyline favorites, and I think this is a good bet to make. Their poor performance on Friday night is giving you some decent odds, and at +124 I think it is tough to not bet on the United States. A draw is listed at +200 on the moneyline, but I truly think the US will win this match by the time the final whistle blows.

As for the over/under, it is listed again at an even 2 runs (-110/-110). Despite this total having pushed on Friday, I think that the over (-110) is the smart bet to make. The United States need to score goals, and Honduras are capable of getting a goal or two of their own, so I think the over has to be the bet you take.

The point spread is a pick’em, and it currently lists the US at +101 odds. Once again, I think this is a smart bet because I think the United States are the vastly superior team.