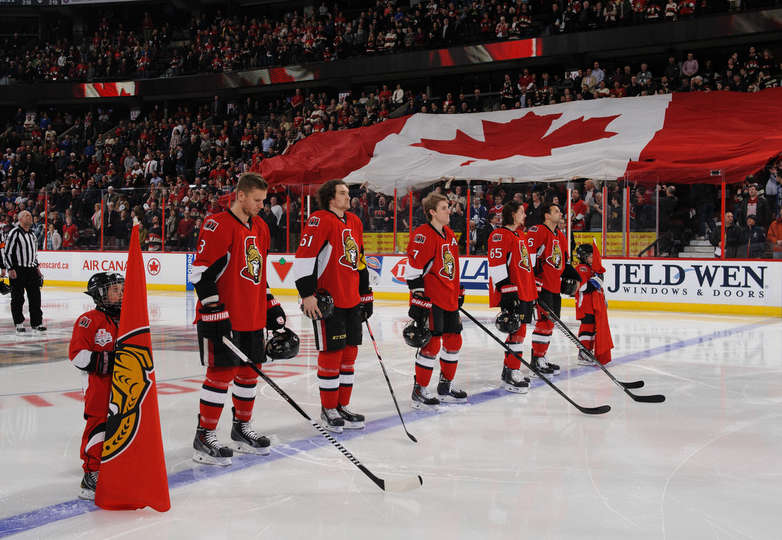 Only four games in the NHL for Wednesday:

The Ottawa Senators got some good news earlier this week as starting goaltender Andrew ‘The Hamburglar’ Hammond has been cleared to return to action. He’s with the team on this road trip but Craig Anderson is expected to get the start in this game. The Senators have managed to go 2-1 in his absence but they’ve not been impressive on the defensive end. The Sens have allowed 8 goals in three games and have allowed an average of 34 shots per game against–tied for 25th in the league.

Columbus has also had a problem on the defensive end which has been made worse by the play of Sergei Bobrovsky. Bobrovsky has allowed 13 goals in three games and the Blue Jackets are off to an 0-3-0 start to the season–their worse since an 0-7-1 start in 2011-2012. The penalty kill has been abysmal, allowing four goals in eleven chances and the Jackets gave up the first goal in all three games so far. Ottawa has had their way with Columbus of late winning 4 of the last 6 meetings head to head including three straight on the Blue Jackets’ home ice. For all of the Senators’ defensive woes they’re still above the ‘Mendoza Line’ for the season and hard to downgrade a team for a 3-1 loss against Montreal.

On paper, this should be an easy game for the 2-1-0 Blackhawks who have won two straight since an opening night loss to the New York Rangers. The Flyers will be honoring Kimmo Timonen before the game though the ’emotional hangover’ won’t be anything like what the Blackhawks experienced opening night celebrating their Stanley Cup victory. The Flyers have some talent but their front office has done a horrible job managing their salary cap status. The Blackhawks have been masterful in this regard. Michael Neuvirth is back in net tonight for the Flyers facing Corey Crawford. Interestingly, the Flyers have dominated head to head play on their home ice winning two straight and 13 of the last 15. The price looks a little high but just can’t make a case for the Flyers given the current form of both teams.

Hard times in Boston where the Bruins are off to their worst start in sixteen years. With the exception of goaltender Tukka Rask–who benefitted greatly from having a solid defense in front of him during the past few years–this team just doesn’t have much talent to work with. That’s a worse situation than Columbus, a team that has the talent but has been playing poorly. There’s talk that the Bruins should trade veteran defenseman Zdeno Chara–one of the few marketable players on the team–and start building for the future. Hard to get a read on Colorado at this point. The Avs have played only two games, winning one and losing one. They dropped a 5-4 verdict to Minnesota to start the year but bounced back in their next game to rip the Dallas Stars 6-3. Semyon Varlamov hasn’t looked especially impressive in net but it’s doubtful that a sputtering Bruins can exploit that.

One team is winless, the other is undefeated but it’s not the way you’d have thought–the Coyotes are off to a 2-0 start while the Western Conference finalist Ducks are 0-2. The Coyotes have been off since Saturday night which at this stage of the season is a serious negative–hockey is a game of momentum and instead of playing the Arizona team has been sitting at home feeling good about their surprising start to the campaign. Arizona is a team heading in the right direction but this is a very tough spot for them against a superior team that doesn’t want to lose their third straight game to a divisional rival.