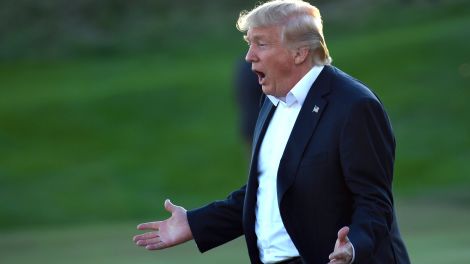 –We’re coming on on the 1st Anniversary of Donald Trump’s election as US President.

–Secretary of State Rex Tillerson is currently on the ‘hot seat’.

No matter what you think of the guy if you’re being intellectually honest you have to admit that the ascension of Donald Trump to the presidency is one of the most bizarre things you’ve ever seen. As an oddsmaker, I never thought I’d be giving the President of the United States a second thought one year after his election. Trump remains a ridiculously divisive figure among the ever shrinking percentage of Americans that get worked up over politics and that’s not going to change. The reality is that neither his political supporters nor opponents want him to be a ‘uniter’. His political opponents in particular want him to remain an anathema to their support base. He’s a fundraising godsend. Since money and power is the primary goal of both major US political parties they couldn’t be happier that Trump is President no matter how miserable they sound. The same dynamic exists for the opponents of his opponents. They’re trying to milk Trump supporters for as much money as possible. The establishment Republican party remains in a very tenuous position. Trump ran against them as much as he did Hillary Clinton and they still haven’t figured out the best way to proceed. The best news to come out of the Trump elections is that despite the shrill histrionics from those that still have a personal identity investment in politics the majority of people continue to tune out the whole sleazy process. The future, after all, will be decentralized and the power of any government or their ‘leader’ will shrink accordingly.

For me at least, the most interesting component of the Trump election/presidency has been the betting markets that have sprung up around it. The 2016 election was by far the most heavily bet election in history at European sports books but that didn’t impress me much at first. That could be as much of a matter of timing as anything else–sports betting is more accessible than ever and as such it’s not surprising that there would be heavy wagering on a bizarre presidential nomination and election process. What’s strange is what has happened since–almost one year out from the election and Trump betting is still fairly strong. My hunch was that the 2017 UK General Election would surpass it but it didn’t come close. Trump remains a unique betting phenomenon internationally.

THE STATE OF DONALD TRUMP BETTING

Getting a straight answer out of a bookmaker is more difficult than getting one from a politician so it’s hard to quantify the state of Trump betting at this time. There was plenty of it immediately after his nomination, most of the ‘Will he be impeached’ variety. Anecdotally, interest in his comings and goings started to wane as the weather got warmer and that was evident from the offerings at sportsbooks around the world. Many dropped their Trump props altogether while others cut back their offerings to the ubiquitous ‘Will He Be Impeached?’ prop. The betting market for the 2020 nomination process and election remained strong, but it looked like Trump specific betting was on the wane.

That belief has been challenged by some European sportsbooks who insist that it continues stronger than ever. I’m skeptical, but without looking at their numbers I can’t quantify the veracity of this claim. There are definitely more political props of all kinds available for betting than I ever expected and they cover all manner of international markets. Betting on European politics has also grown significantly and might actually be bringing in the most revenue. Then again, Trump bettors–pro and con–are just the type of players that sportsbooks want since they bet almost entirely on emotion with very little objective analysis.

In honor of the one year anniversary of Donald Trump’s election as US President I’ve updated his betting odds. I’ve also added in some new markets such as the fate of embattled Secretary of State Rex Tillerson and a whole bunch on Trump’s prickly relationship with the NFL over the National Anthem protests. You can expect another update on the first anniversary of his nomination, if not sooner:

WILL DONALD TRUMP SERVE HIS FULL FIRST TERM AS PRESIDENT OF THE UNITED STATES?

WILL DONALD TRUMP SERVE A SECOND TERM TERM AS PRESIDENT OF THE UNITED STATES?

WILL DONALD TRUMP RESIGN AS PRESIDENT OF THE UNITED STATES?

WILL DONALD TRUMP BE IMPEACHED IN HIS FIRST TERM AS PRESIDENT OF THE UNITED STATES?

YEAR THAT DONALD TRUMP WILL BE IMPEACHED?

NEXT TRUMP STAFFER TO RESIGN/BE FIRED?

WILL KIRSTJEN NIELSEN BE CONFIRMED AS SECRETARY OF HOMELAND SECURITY BY 12/31/17 AT 11:59 PM EASTERN?

WILL MIKE PENCE ATTEND A NFL GAME BETWEEN (INSERT START DATE HERE) AND 2/4/18?

WILL MIKE PENCE STAY UNTIL THE END OF A NFL GAME BETWEEN (INSERT START DATE HERE) AND 2/4/18?

WILL BOTH SUPER BOWL LII TEAMS HAVE A PLAYER KNEEL DURING THE NATIONAL ANTHEM?

WILL A DONALD TRUMP INTERVIEW BE AIRED ON THE SUPER BOWL LII PREGAME SHOW?

WILL A NFL PLAYER BE SUSPENDED OR RELEASED DUE A NATIONAL ANTHEM PROTEST DURING THE 2017 NFL SEASON?

WILL THE GOLDEN STATE WARRIORS VISIT THE WHITE HOUSE IN 2017?

WILL DONALD TRUMP ATTEND A WASHINGTON CAPITALS NHL GAME BY 4/15/18?

WILL DONALD TRUMP BE PHOTOGRAPHED WEARING AN ALEX OVECHKIN #8 WASHINGTON CAPITALS JERSEY BY 4/15/18?