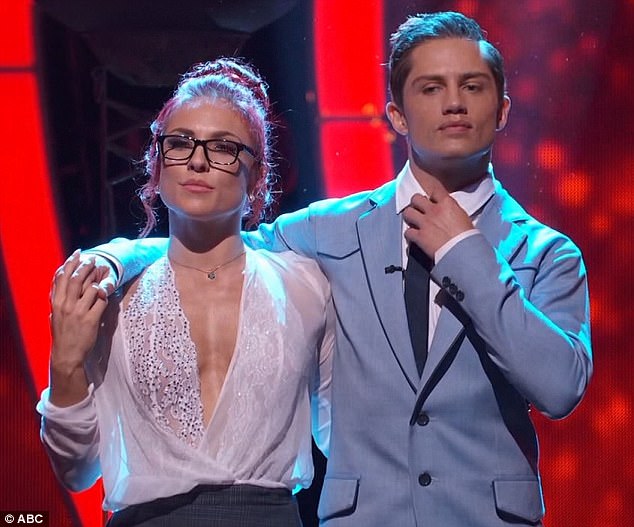 Bonner Bolton was eliminated on Monday’s Episode 8 of ‘Dancing with the Stars’ and generated what approximates ‘controversy’ in the mainstream media. Each team danced twice on Episode 8 and the second dance was considered ‘scandalous’ by the tepid standards of network television. Bolton’s partner Sharna Burgess explained the concept of the pseudo-infamous second dance:

“This is very much like an intertwined office love triangle, love affair. We are having a lot of fun in this trio, but we don’t quite have the moves down yet.”

Bolton did what any intelligent bull rider would do on this type of program and included a second comely female dancer in his performance, namely DWTS troupe member Britt Stewart. It was actually a pretty cool idea for a dance with the two lovely dancers wearing white shirts and short skirts as they vied for the attention of ‘CEO’ Bolton. Instead of just having some fun with it the judges reacted as if Bolton had killed a kitten onstage. Judge Carrie Ann Inaba whined like a baby about the steamy number:

“I feel like I need to take a shower. It was kind of raunchy. I mean, you guys looked amazing and very sexy, and I loved the high concept — it was very clean and pristine. And I felt like Bonner you didn’t pop as much as I needed you to pop next to these two booty-popping — but you didn’t booty-pop, I noticed that … a lot, but not quite enough Bonner from you.”

Bolton didn’t ‘booty pop’ but he got the business from head judge Len Goodman who clearly needs to be put out to pasture:

The saddest take was from judge Julianne Hough. The 28 year old native of Orem, Utah set the public perception of the Beehive State back a couple of decades with this assessment of Bolton’s performance:

“I feel like we watched like the security cameras and I feel bad. The production was awesome. The girls are sassy as can be. I definitely saw some step touches and some hip thrusts and that’s who’s going to be voting — America — and they like that.”

JUDGE GOODMAN GOES UPSIDE BONNER’S HEAD, IS FORTUNATE NOT TO GET BEAT DOWN

The humorless judge Goodman also got really snotty to Bolton in his ‘dismissal’ from the show. Backstory–Bolton had been frustrated during rehearsal due to his physical limitations. Goodman lectured Bolton about how to deal with ‘frustration’ and sniffed that he should have been gone a long time ago:

‘You’ve got frustrated — please don’t blame the judges, blame the viewers, because really you’ve gone a bridge too far. I’m sorry but you should’ve been…’

Goodman gave a dismissive wave of his hand to indicate that Bolton had overstayed his welcome. Lest we forget, a refresher on what Bolton does in his day job:

And why would Bolton be frustrated with his ‘physical limitations’? It might have something to do with the fact that he BROKE HIS NECK a year ago and was TEMPORARILY PARALYZED:

“I was winning. But then I dismounted wrong, landed on my head and broke my neck.”

Not surprising for a legit hardass, Bolton downplays the severity of the injury. The bull in question came close to stomping him and he was fortunate that he didn’t leave the arena in a bag. The injury was downright brutal:

At Advocate Lutheran General Hospital in Park Ridge, Illinois, it was determined Bolton had broken his C-2 vertebrae, the same injury suffered by actor Christopher Reeve. Fortunately, unlike Reeve, his spinal cord was not transected.

Doctors fused his C2 and C3 vertebrae, inserting into the bones what looks like a prehistoric clamp chomping his neck. Bolton had his feeling and movement back but had to stay completely still for a month – a frustrating mandate for a young man perpetually on the go since he could walk.

His rehab was no walk in the park either:

“There were hard, dark times. The pain medicine was making it hard for me to hold on to any positive thoughts. I sort of wanted to end it all. But I got rid of the meds and started pushing myself to get better.”

So let’s wrap our head around that for a minute. Bolton almost died in the arena and was fortunate to not be trampled by a rampaging monster. He ended up with the same injury that paralyzed Christopher Reeve. He caught a break and his spinal cord wasn’t injured so he fought his way back to health after he *got rid of his painkillers*. You think that you might want something to take the edge off the pain after you break your C-2 spinal vertebrae?

Miserable douchebag judge also caught a break–that Bolton is a gentleman. The best thing that would have happened all season would have been for Bolton to take umbrage to his comments like they do in West Texas. The nerve of the dude to lecture Bolton on handling ‘frustration’ like a man.

Anyway, here’s the scores for Week 8:

Here’s the overall scoring average for the remaining four contestants:

Posted below you’ll find a revised ‘To Win Season 24’ odds rundown along with the Week 9 prop bet odds. ‘Dancing With The Stars’ Season 24 Episode 9 aairs at 8:00 PM EDT on Monday, May 15:

TO BE ELIMINATED IN WEEK 9

OVERALL AVERAGE SCORE FOR WEEK 9 WILL BE?

WILL ANY JUDGE AWARD A PERFECT SCORE OF 40?

THE LOWEST SCORE OF WEEK 9 WILL BE

Episode 10 was the semifinal show in Season 23