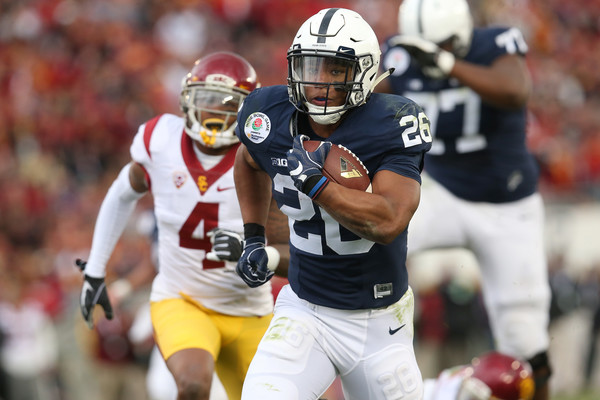 As a graduate of the University of South Carolina and a confirmed ‘SEC honk’ the Rose Bowl matchup between USC and Penn State was a confirmation of the (admittedly incorrect) stereotype that Southern football snobs have about the sport in the rest of country–no defense. USC and Penn State combined for 98 points and 1,040 yards as the Trojans won the highest scoring Rose Bowl in history 52-49. The Nittany Lions covered as a +7 underdog and the 98 combined points obliterated the total which was anywhere from 59 to 60.5 depending on where you played it. ESPN charitably called the game a display of “spectacular offensive play”. No doubt their contractual relationship with the Rose Bowl, the Pac-12 and the Big Ten prohibited them from calling it a display of ‘staggering defensive ineptitude’. Ultimately, the game came down to the wire and USC place kicker Matt Boermeester nailed a 46 yard field goal as time expired to give the Trojans the victory.

THERE ARE UNBREAKABLE RECORDS IN SPORTS….

There are plenty of records in sports that are considered ‘unbreakable’ from Wayne Gretzky’s 2,857 career points to Wilt Chamberlain’s highly mythologized 100 points in a NBA game. Actually, I consider only the former as ‘unbreakable’. In an era of three point sharpshooters and big egos it’s not hard to envision a team feeding their superstar enough shots to break Wilt’s 100 point record game. 66 players have scored 60 or more points in a NBA game, most recently Klay Thompson of Golden State on December 5, 2016. Only four players have put up 60 plus more than once–Kobe Bryant did it 6 times, Michael Jordan did it 5 times and Elgin Baylor did it 4 times. And Wilt? He put up 60+ a ridiculous 32 times in his career which is a record more unbreakable than his 100 point game in Hershey, Pennsylvania against the New York Knicks on March 2, 1962.

As a hockey fan, I don’t know if there’s a record in sports more untouchable than Gretzky’s career point total. Consider this–ageless wonder Jaromir Jagr recently moved into second place on NHL’s all time scoring list. He’ll turn 45 in February and the mere fact that he’s still playing at the highest level of hockey–and playing well–at that age is ungodly. Jagr would have to average a point a game until he’s *66* just to tie Gretzky’s career point total. A player could score 140 points a year for 20 years and *still* be 57 short of Gretzky’s mark. Worth noting that no one has scored 140+ points in a NHL season since 1996 (Jagr did it once, putting up 149 points in the 1995-96 season. Twenty one years ago).

….AND THEN THERE ARE THINGS THAT ARE ALMOST STATISTICALLY IMPOSSIBLE

College football coaches can’t claim a ‘moral victory’ with a straight face and keep their job. They certainly can’t do so on a statistical oddity. In fact, they might not even realize the magnitude of what they’d done. Penn State coach James Franklin is one of my favorites in college football dating back to his improbable run at Vanderbilt where he made a school with Ivy League level academics competitive in the SEC. If *he* tried to pat himself on the back for a statistical oddity I’d suggest he should be run out of town.

Even so, it’s worth noting that Penn State did something in the Rose Bowl that you’ll likely never see again. In fact, it’s almost hard to believe you saw it in the first place. It began very innocuously as Nittany Lions quarterback Trace McSorley completed an 11 yard touchdown pass to Mike Gesicki with :54 seconds left in the first half to cut USC’s advantage at the time to 27-21.

Things started to get strange in the second half. USC got the ball first but went ‘four and out’ and had to punt. Penn State’s John Reid made the ‘fair catch’ on the Nittany Lions’ 21 yard line. On the next play, Saquon Barkley ran the ball back 79 yards for a touchdown and Tyler Davis’ PAT gave Penn State a 28-27 lead. USC got the ball back on the kickoff but eventually had to punt. On Penn State’s first play from scrimmage after the punt Trace McSorley threw a 72 yard touchdown pass to Chris Godwin and after the PAT Penn State had a 35-27 lead. The Nittany Lions kicked off again and on the second play of USC’s ensuing drive quarterback Brandon Bell had a pass intercepted by Sam Darnold and run back to their three yard line. On the next play, quarterback Trace McSorley ‘called his own number’ and ran the ball in for a touchdown from three yards out. The point after was good and Penn State led 42-27.

More significantly, they had scored four touchdowns on four offensive plays. The ESPN announcers commented that they had ‘never seen that before’ and for good reason. It’s just about impossible.

WHAT ARE THE ODDS?

So what are the odds of a team scoring four touchdowns on four offensive plays? Somewhere between “I have no clue” to “astronomical”. First of all, I’m not sure how you’d factor in all of the variables necessary to quantify the probability of Penn State’s ‘four for four’ touchdown spree. Statisticians have tried to determine the probability of a ‘one play’ touchdown in football. They’ve considered a number of variables, most significantly field position. Obviously, a ‘one play touchdown’ from the opponent’s one yard line has a much higher probability than one from your own ten yard line. But what has to transpire for a team to get the ball four times on their one yard line? Most likely, a receiving team would have to fumble the kickoff four consecutive times and that’s another statistical rabbit hole that we’d have to crawl down. Unless they’re doing it intentionally the odds of that happening would be astronomical not to mention the odds of a placekicker dropping the ball perfectly on the one yard line four consecutive times.

Separately, statisticians have tried to determine the probability that a last second ‘Hail Mary’ touchdown pass will be successful. Once again, there are countless variables that can be considered from the score to the quarterback’s arm strength. Of these, field position is once again likely the most significant. Inside the opponent’s 20 yard line a team has a decent chance of converting the ‘Hail Mary’ but outside of the ‘red zone’ the probability ranges from ‘statistically insignificant’ to 5% (or .05 if you want to do it in decimal form) depending on field position. So let’s assume a 2% (.02) chance of a successful ‘Hail Mary’ from outside of the opposing 20 yard line. It’s just an estimate, but that’s all we’re going to be able to get here anyway.

Assuming that a team has a minimum .02 chance of scoring a touchdown on any specific play we can do a bit of ‘figurin’ to estimate their chances of scoring on *four* consecutive plays. Once again, this is a ‘quick and dirty’ estimate of something that in reality has countless variables:

This is an oversimplification of a much more complex equation but this will serve our purposes. I’d be willing to wager that if you went to the trouble of isolating as many variables as possible you’d get the same result.

Good luck on cashing a ticket for ‘+infinity’ at a sports book.