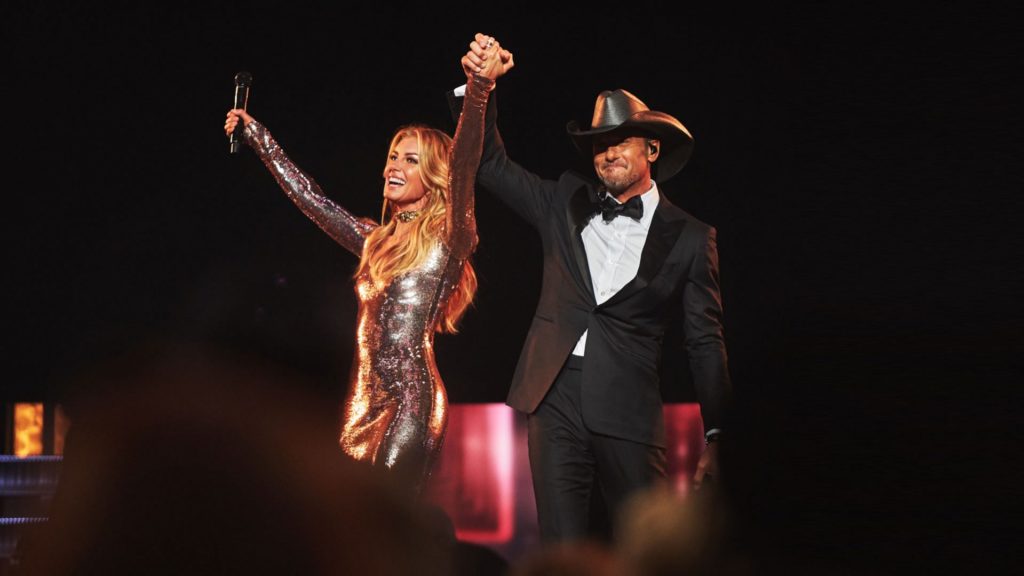 –The Academy of Country Music (ACM) Awards have been held every year since 1966.

–The 2018 ACM Awards will take place at the MGM Grand Garden Arena in Las Vegas.

The Academy of Country Music Awards was first held in 1966 becoming the first major awards show recognizing the genre. The show decided on a hat motif for the award in 1968 and it became iconic–it’s been used ever since.

The ACM Awards is one of the most popular award shows among the general public and they’ve always gone out of their way to accommodate the fans. In 2003, the awards moved from Los Angeles to the Mandalay Bay Events Center in Las Vegas. It would stay at the Mandalay Bay until 2006 when it moved across the street to the MGM Grand Garden Arena where it would stay until 2014. In 2015, the show was held at AT&T Stadium in Dallas–in the process they broke the record for ‘Most Attended Awards Show’ with a crowd of 70,252.
The show returned to the MGM Grand Garden Arena for 2016, moved to the new T-Mobile Arena for 2017 but are back down the road and across the street at the MGM for 2018.

The mainstream media has made little of it but the first thing I noticed was the curious decision to return to the MGM Grand Garden for the 2018 awards show. Since the opening of the T Mobile Arena the venerable MGM Grand Garden has accepted its role as a second tier facility. It’s still a great venue to be sure and remains my favorite place on the planet to watch boxing. Still, for an industry so transparently image conscious as mainstream country music it begged a few questions. My first theory–the Golden Knights factor. Maybe the ACM was forced to make the switch since one year ago exactly no one expected the expansion Vegas Golden Knights NHL team to still be playing hockey on April 15. My preseason odds had the Golden Knights +700 to make the playoffs and +3750 to win the Pacific Division. They’ve done both. I also had the Golden Knights at +7500 to finish with the best record in the Western Conference. With three games remaining they’re technically still in the hunt but would have to win out while the West leading Nashville Predators lost all their games in regulations. By my calculations at the time of this writing a Nashville point in any of their remaining games wins them the West. Should the Knights go 3-0 and the Predators 0-3 the teams would be tied at the end of the season with 113 but Vegas would win the tiebreaker as they’d have more regulation and OT wins (ROW). Since Nashville hasn’t lost straight games in regulation all season that +7500 payback is likely off the table.

In theory this made sense–the ACM could have booked the T Mobile Arena after last year’s show only to get ‘bumped’ as it became apparent that the Golden Knights weren’t the typical expansion team. Typically, a team that uses a venue for their home ice gets preference in the event of a scheduling conflict. ACM announced the date of the 2018 awards in mid December but made clear from the outset that the awards would take place at the MGM Grand. Since that time, the April 15 date at the T Mobile has been filled with a second night of Justin Timberlake but the extra show was only recently added meaning that until that point Las Vegas’ top venue had the date open. Don’t forget that the MGM Grand Garden and T Mobile Arena essentially share ownership as MGM Resorts has a 50% stake along with Anschutz Entertainment Group in the spiffy new venue.

Other than public perception there’s not much difference between the two venues. Depending on configuration, the MGM Grand Garden has a capacity of 3 or 4 thousand less than the 20,000 seat T-Mobile Arena. The ACM also has a lengthy relationship with the building as they held the awards at the MGM Grand from 2006 through 2014 and in 2016. That led me to my next theory–the live attendance. It would be hard to believe that the awards still couldn’t pack the T Mobile Arena since in 2015 the ACM Awards became the Most Attended Awards Show in history with just over 70,000 fans at the AT&T Stadium in Dallas. Oddly enough, I couldn’t find any attendance data on either the 2016 show at the MGM Grand or the 2017 show at the T-Mobile Arena. The ACM might have preferred the optics of a jam packed MGM Grand Garden over the more spacious T-Mobile Arena. They might be so familiar with the MGM Grand setup that it’s easier to stage. Besides, the audience for every awards show from the Tony Awards to the MTV Music Awards are in free fall suggesting that the entire concept might be irrelevant in the digital era. Even if the ACM Awards audience or for that matter the entire mainstream country music fanbase is dropping they’re not alone in a changing entertainment landscape.

Here are the odds for the 53rd Academy of Country Music Awards:

ENTERTAINER OF THE YEAR

ALBUM OF THE YEAR

SINGLE RECORD OF THE YEAR

SONG OF THE YEAR

VIDEO OF THE YEAR

The winners of the following awards have already been announced: