Home > CF Picks and News > College Women’s Flag Football Coming Soon To A Betting Board Near You? 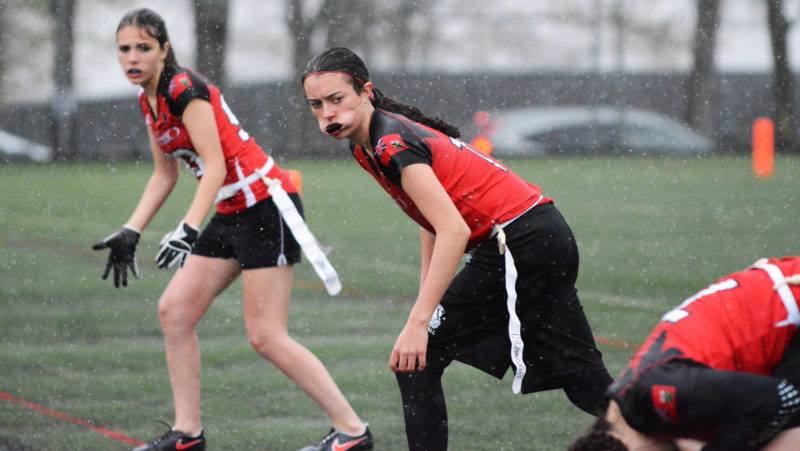 That remains to be seen but women’s flag football is beginning to gain traction at the high school and collegiate level. This is due in large part to the deep pockets and marketing heft of the National Football League. They’ve bankrolled an endeavor called NFL Flag, which runs a non-contact youth football program open to boys and girls all across the US. As of October 2019, 500,000 youth athletes across the United States play in NFL Flag leagues. Earlier today, the NFL and another deep pocketed ally aka Nike made a donation of $5 million worth of products and equipment toward girls’ flag football programs at US high schools.

Last Spring, the NAIA announced plans to add women’s flag football for a competitive sport for spring 2021. Whether that still transpires in light of the continued issues with the COVID-19 pandemic remains to be seen but the intent and interest are there. More importantly, so is the NFL which is also lending their support to the endeavor to make women’s flag football a legitimate college sport. Here’s what the press release announcing the initiative had to say about the plans:

Reigning Champs also operates NFL Flag, a youth flag football program backed by the NFL that’s open to boys and girls across the U.S. The league will now work with Reigning Champs and the NAIA to define competition guidelines and identify schools interested in creating varsity flag football programs. The NAIA, which consists of 249 small colleges across the U.S., plans to begin hosting showcases this summer or early fall for female athletes interested in playing college flag football.

Troy Vincent, NFL EVP of football operations, hailed the partnership at the time it was announced:

“Football is for everyone. This groundbreaking and historic joint venture provides an opportunity for the values, fun and competitive environment of football to be enjoyed as a varsity sport by female student-athletes attending NAIA institutions across America.”

There have been other attempts to popularize football for women over the years. The most successful began with all of the competitive legitimacy of a wet t-shirt contest. Lingerie football began for, well, for the obvious reasons but somewhere along the way morphed into a fairly competitive brand of football where the athletes just so happen to be attractive women who just so happen to be wearing lingerie. The Lingerie Football League even rebranded to the ‘Legends Football League’ to de-emphasize the lingerie component of the game:

As my wife is fond of saying ‘pick a lane’. There is definitely something appealing about watching attractive women play football in lingerie much for the same reason that watching attractive women do anything in lingerie is appealing. At the same time, the sport is definitely a hard hitting and physical contest between teams of real athletes. The focus of the lingerie itself has also changed to be more of what the league calls ‘performance wear’. To be fair, it’s definitely easier to market the Legends Football League because of the uniforms. Be honest–if you were offered primo seats to a WNBA game and a Legends Football League game which one would you choose?

There’s no indication that women’s flag football will involve lingerie–performance wear or otherwise–but much as the Lingerie Football League did it won’t be a huge surprise if it were to end up on the betting board in some fashion. Obviously, it won’t be a huge main board sport but then again a couple of years ago I would have said the same thing about Russian professional table tennis.